This adorable Turkey Crust Pumpkin Pie is easy to recreate and will amaze your family and friends this holiday season. Let me show you how easy it is to assemble and bake this fun Thanksgiving holiday treat.

The key to assembling the turkey crust (so he doesn’t drown in all that luscious pumpkin filling) is to bake the pumpkin pie partially before adding Mr. Tom Turkey on top.

That way the custard pie will be set enough so the turkey crust will sit on top of the pie and won’t be eaten up and fall to the bottom of the pie, rendering him invisible.

That would be no fun at all!

**Please Note – The printable recipe card with detailed instructions and complete ingredient measurements for making this Adorable Turkey Crust Pumpkin Pie is available near the end of this post.

Why this recipe works?

Because the pie is tasty, and the decorations are not difficult or intimidating.

I’ve done my best to give you easy step-by-step instructions and descriptions but the best pies are the ones that are unique with your own style and personality.

Have fun with this and you’ll be as proud as a peacock (um, make that turkey) with how your pie turns out.

Oh, don’t forget to tag me across all the social media platforms (@KudosKitchen) with a photo of your pie turkey crust pie because I’d love to see your edible work of art!

**Note – The following lists of ingredients plus kitchen tools and equipment contain affiliate links (highlighted in blue) for your consideration and shopping convenience.

Is homemade or store-bought pie dough better for this recipe?

That depends on you!

To simplify the process of making this pumpkin pie with a turkey crust, I used some store-bought pie crust that can be found in the refrigerator section of the grocery store.

However, if you have a penchant for making your own crust, by all means, use your favorite recipe, but be sure you make enough for a double-crust pie.

Can this turkey pie crust design be done on a store-bought pumpkin pie?

Sure thing!! Whatever is easier for you!

If using a store-bought pumpkin pie (as shown in the video), start by baking the pie halfway before adding the turkey crust.

OR, you can pre-bake the turkey and add him to the fully baked pie as described below.

Can I assemble and bake the turkey crust by itself first?

If this sounds like a method you’d like to try, make sure to watch the baking of the turkey closely.

I suggest assembling him on a baking sheet lined with parchment paper and sprayed lightly with baking spray.

Bake him in a preheated oven to 12-15 minutes (keeping a close eye on him so he doesn’t burn).

Once he is golden brown, remove him from the oven and allow him to cool completely before adding him to the top of the cooked pumpkin pie. A large cake mover works well for this.

Can this turkey crust pumpkin pie be made in advance and frozen?

Below are some pie cookbooks I think you’ll also enjoy.

The instructions for making a pumpkin pie with a turkey crust;

Since his original creation, I’m as pleased as pie that this Tom turkey decorated dessert has been featured in the following publications.

The View From Great Island

Below is the printable recipe card for today’s pumpkin pie with a turkey crust.

If you’ve enjoyed this recipe and look forward to making it (or have already made it), I’d appreciate if you’d take a moment to give it some feedback by way of stars near the comment section at the end of this post. Thank you so much! 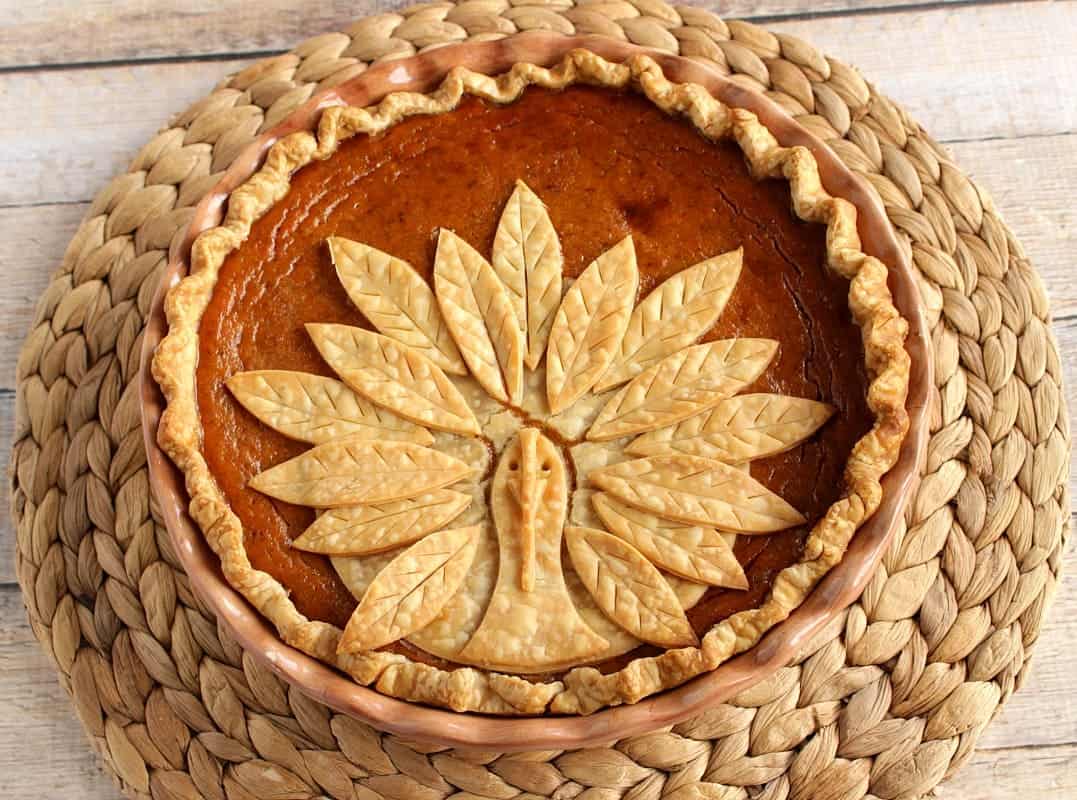 For other delicious pumpkin recipes from around the web, please click on the following titles for;

This recipe post for my pumpkin pie with a turkey crust is also proudly featured on Meal Plan Monday.

I sincerely hope you’ve enjoyed today’s recipe for Turkey Crust Pumpkin Pie as much as I’ve enjoyed bringing it to you!

**Note – The post above includes affiliate links. As always, I truly thank you for your support! 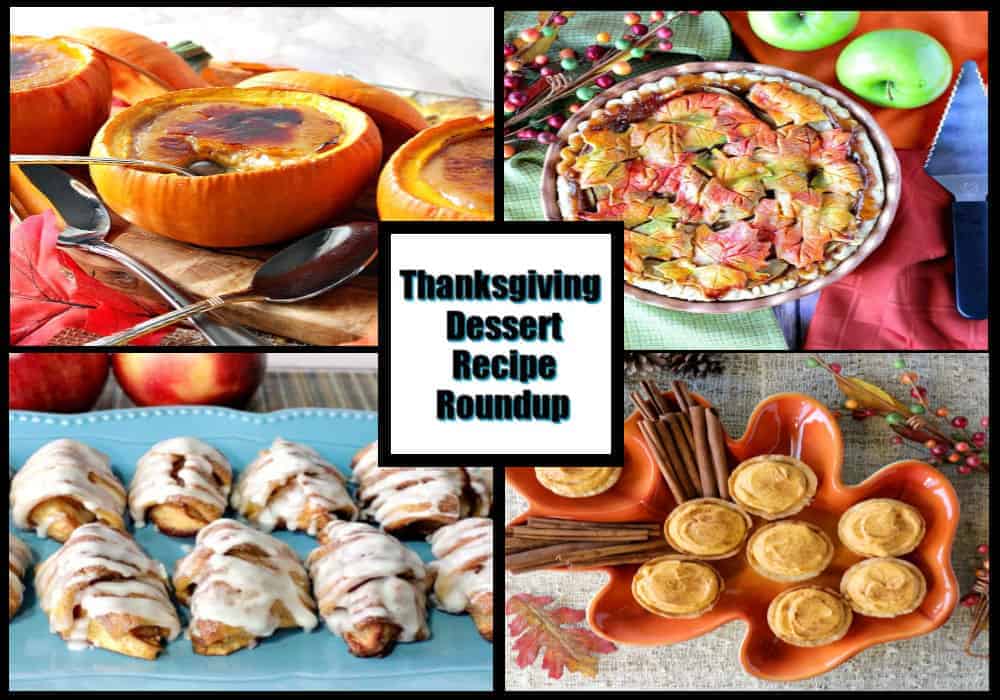 Our cousin sent me this pie crust idea, so naturally, I had to try it. LOVE it... It as something special to the Thanksgiving table!

Thank you, Donna, and thank you for the star rating! I appreciate it and hope you had a wonderful Thanksgiving. Take good care, and be well. Renee

Hi there, Kate McDemott, the author of “The Art of Pie” and “Pie Camp”, shared news of your wonderful turkey crust pumpkin pie. It is so adorable.

I see you show bronze luster powder but there is no mention of it in the recipe and it doesn’t look like your turkey was painted? What are you using it for?

Thanks for the inspiration, clear written directions and video!

Hi, Anne! That's awesome that Kate shared about my turkey crust pumpkin pie. When and where did this happen because I am unaware? That said, I did not use bronze luster powder on my pie. I didn't even use eggwash to finish him off. The only thing I used was a touch of water to connect the pieces. I'm glad you appreciate the clear directions and video. I've seen tons of turkey pies that readers have shared with me, and they're all amazing. Each and every baker puts their own spin on their pie, making them all so special and unique. I'm so happy you like the pie. Enjoy, and Happy Thanksgiving! Renee

Wow! What an amazing pie renee. I really love all your recipes i have to say. If you like you could also try baking it at 350 degrees for about 18 minutes or until the pie crust is golden brown. But i really loved your work and would definitely give it a try.

Thank you, Peter. I appreciate the suggestion. I hope you enjoy the pie! Renee

it's a really awesome pumpkin pie. thanks for sharing your recipe.

It's my pleasure. Enjoy!!

I love all your delicious recipes and can’t wait to try this one.

Awesome! Thanks so much, Alisha!