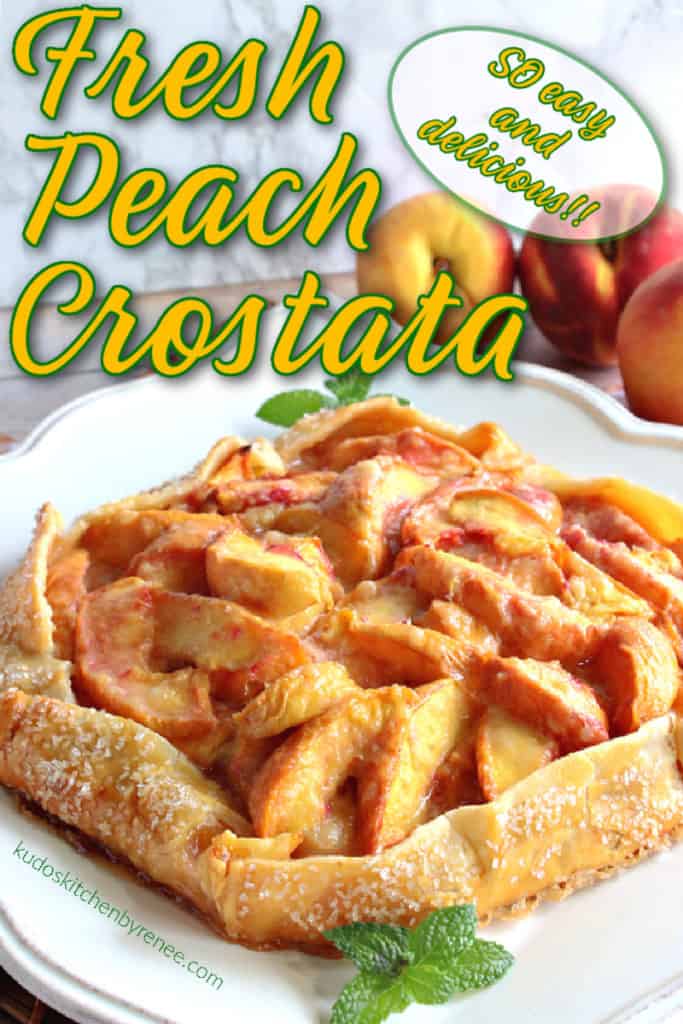 This fresh peach crostata is similar to biting into a fresh ripe peach except it has a flaky piecrust shell, and it's best served warm and with a fork.

If you're intimidated by making a whole pie, then making a crostata should be right up your alley.

By using either homemade or store-bought pie crust this delicious baked peach dessert will get you a 5-star rating from your family and friends!

**Please Note - The printable recipe card with detailed instructions, complete ingredient measurements, and nutritional information for making today's peach crostata is available at the end of this post. OR you can hit the "jump to recipe" button (found above) to be taken directly to the recipe.

What is the trick to preventing a soggy bottom pie crust?

I learned this trick just recently, and I swear by it.

Whether you're using homemade or store-bought pie crust, brush the bottom of the crust with a light layer of a jam or jelly.

The layer of jam between the pie dough and the fruit filling will act like a water (make that juice) barrier, and will help prevent the dreaded "soggy bottom!"

For this recipe, I used an orange marmalade because that's what I had in my fridge, and I thought the flavor would go nicely with the fresh peach flavor.

Feel free to use whatever your favorite jam or jelly is, and one you think would compliment whatever flavor of fresh fruit pie or crostata you're making.

I promise that you'll be happy with the results, and the tiny, unexpected, citrus flavor!

How long does this recipe take to make from start to finish?

Naturally if you're making your own pie crust it will take a bit longer than if you use store-bought pie dough.

For the pie you see here, I used a store-bought pie dough because I conveniently had some in the freezer.

For me, this fresh peach crostata took approximately 60 minutes from start to finish (not including the cooling time before serving).

Can this peach crostata be frozen after baking?

Yes, but make sure to keep it wrapped well, and stored level, in the freezer.

*Important - Don't forget to completely cool the crostata before wrapping and freezing.

I would suggest transferring the baked and cooled crostata to a cardboard cake round (for stability) and then wrapping it well in several layers of freezer-safe plastic wrap.

This crostata can be frozen for up to 3 months.

How to serve fresh peach crostata after freezing:

Partially unwrap the frozen crostata and allow it to thaw at room temperature.

If reheating, place the crostata on a baking sheet, cover it lightly in foil, and reheat in a preheated 325-degree oven for 10-15 minutes.

Can nectarines be substituted for the peaches in this recipe?

Sure. No problem. Just swap them out and continue with the recipe as written.

Should the peaches be skinned before making this recipe?

That is a personal decision. I did not skin my peaches first.

Maybe because I'm lazy, and maybe because I don't mind the peach skin in my desserts. I'll let you decide which one is the truth. LOL

If you do decide to remove the skin from your peaches here's an easy way to do it:

How ripe should the peaches be?

The peaches should be able to "give" just a little when squeezed lightly, but not be squishy, and not rock hard.

Will canned peaches work for this recipe?

Well, since I didn't write this recipe with canned peaches in mind, I can't speak to that with the utmost confidence.

However, what I will say is that I do think it will work, as long as you take a few easy but extra steps in the preparation.

I would use peach slices packed in light, not heavy, syrup. And I would drain them very well before continuing on with the recipe.

I also would suggest using at least two cans (possibly three) of drained peach slices in order to fill the crostata nice and full (as shown in the photos).

Carry on with the recipe (as written) by combining the peaches in a large bowl with the other ingredients before completing the crostata.

Will frozen peaches be used for this recipe?

Just make sure to thaw them completely first, and drain off any liquid that accumulates during the thawing process.

Once the peaches are completely thawed and dry, you can continue with the recipe as written.

No ice cream maker? No problem! This no-churn peach pecan ice cream is just like biting into a fresh and juicy summertime peach!

What do you get when you take a classic dessert like bananas foster and swap out tree-ripened Georgia peaches? Three guesses. Peaches Foster, of course!! It’s an easy yet elegant dessert that takes only about 15 minutes to make!

How to make fresh peach crostata:

Below is the printable recipe card along with the exact ingredient measurements and nutritional information for making today's easy homemade peach crostata. 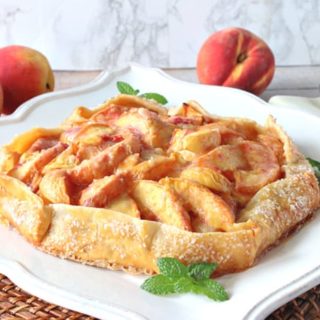 I sincerely hope you've enjoyed today's fresh and easy peach dessert as much as I've enjoyed bringing it to you!!