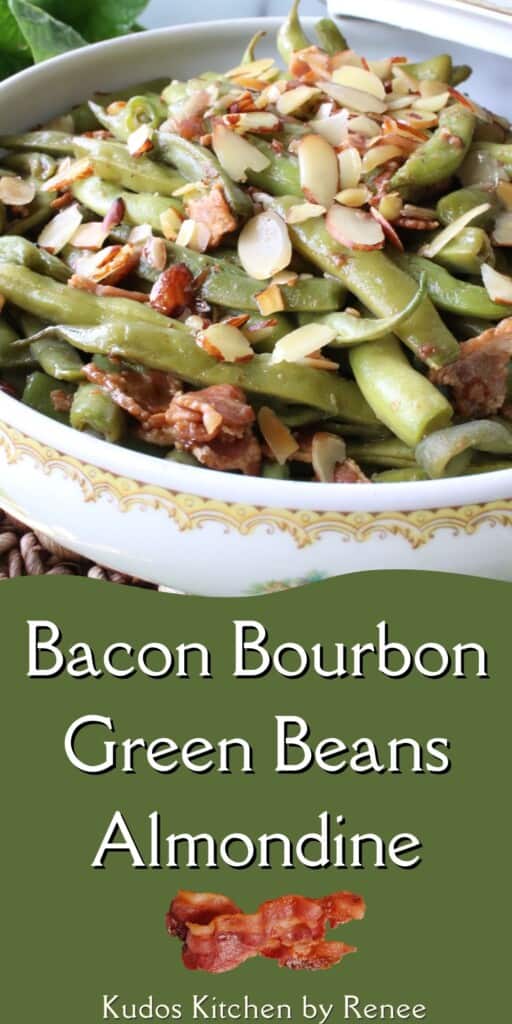 You can have this impressive green bean side dish on the table in under 30-minutes. It's fancy enough to serve for the holidays and yet it's easy enough to make any night of the week.

Green Beans Almondine is a delicious buttery bourbon update on a classic and will soon become your favorite way to eat green beans.

You may want to serve today's delicious skillet green beans with bacon and bourbon alongside the 5-Ingredient Slow Cooker Root Beer Country Ribs featured in the above video. It would be a very tasty choice, indeed.

The almonds I used were thinly sliced but feel free to use chopped or even slivered almonds depending on your preferences.

Extra virgin olive oil is my preferred oil for this dish because of its fruity flavor. However, feel free to use canola, vegetable, grapeseed, or avocado oil.

The bourbon I used Jack Daniels, and the bacon I used was regular cut smoked bacon. Feel free to use any type of bacon you prefer.

See the printable recipe card at the end of this post for the exact quantities.

⏲️ How long will the vegetable recipe take from start to dinner?

Roughly 20 minutes, if while you're browning the bacon you're also prepping the green beans.

🍴 How many servings does this recipe make?

I've written this recipe with the idea of serving 6 people. However, I know that I could eat the entire bowl all by myself (but don't tell)! 🤭

Store these green beans in and airtight container in the refrigerator for up to 5 days.

🧊 Can these green beans be frozen after cooking?

You bet! Store them in an air-tight freezer container or zip-top bag and freeze them for up to 2 months.

🌡️ How to reheat:


If cooking from frozen, thaw the beans completely in the refrigerator over night.

To reheat, add them to a skillet and cook over medium/low (stirring occasionally) until hot. Or, cover them with plastic wrap and heat them in a microwave safe bowl for 2-3 minutes on 80-90% power, or until hot.

After browning the bacon and adding the green beans, deglazing the pan with water (or you can use stock of your choosing) is a sure-fire way to get the most bacon flavor infused into the green beans.

After adding the water to the pan, scrape up the brown bits that have stuck to the bottom of the skillet with a spatula. Viola! A clean pan and a completed dish that's packed with flavor!!

⚠️IMPORTANT - Before adding the bourbon to the skillet make sure to turn the heat under the pan to LOW to prevent a flareup. Once the bourbon has been added, you can increase the heat again as called for in the recipe.

Toasting nuts of any kind will bring out their flavor. To toast the almond slices for this recipe add them to a small skillet (without oil or spray) over medium/low heat and shake or stir the skillet frequently. Do not step away from the skillet at this point as nuts will burn quickly. As soon as you can smell the almonds they're toasted and ready to use.

If you prefer not to use bourbon for this recipe feel free to switch it out with a vegetable or meat stock or you can swap it out with a dry white wine.

Frozen or even canned green beans will work for this recipe if desired. If using frozen beans make sure to thaw them completely and dry them well before adding them to the skillet with the bacon.

If using canned green beans, drain and dry them well before adding them to the skillet with the bacon. You may also wish to cut the amount of salt called for in the written recipe as canned vegetables contain a lot of sodium.

Turkey bacon can be used in place of pork bacon if desired, and diced pancetta would be amazing. Of course, you can leave the meat products out if you'd like to make a completely vegetarian dish.

Cut a half a pound of bacon into 1" pieces.

Brown the bacon in a large skillet, stirring frequently until the bacon is almost crisp.

While the bacon is browning, trim the stem end from the green beans and cut them in half, if desired.

Add the prepared green beans to the skillet with the bacon along with extra virgin olive oil and butter.

Stir the green beans and bacon well and season with salt and pepper.

Add water to the pan to steam the beans, and deglaze the pan (see next step).

After adding the water use a spatula to deglaze the pan by scraping up all the browned bits (fond) from the bottom of the skillet that came from browning the bacon.

Once deglazed cover the skillet and allow the beans to steam for 5-7 minutes.

After steaming, remove the cover and turn the heat to low. Add the bourbon to the pan and stir well to combine. Continue to cook the beans an additional 3-4 minutes.

Spoon the completed beans into a serving bowl and top them with toasted slices almonds before serving.

I sincerely hope you've enjoyed today's skillet green bean recipe with bacon and bourbon as much as I've enjoyed bringing it to you! 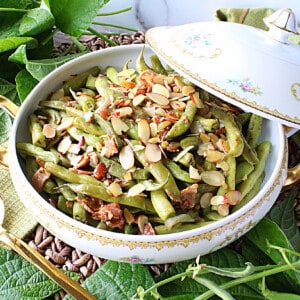