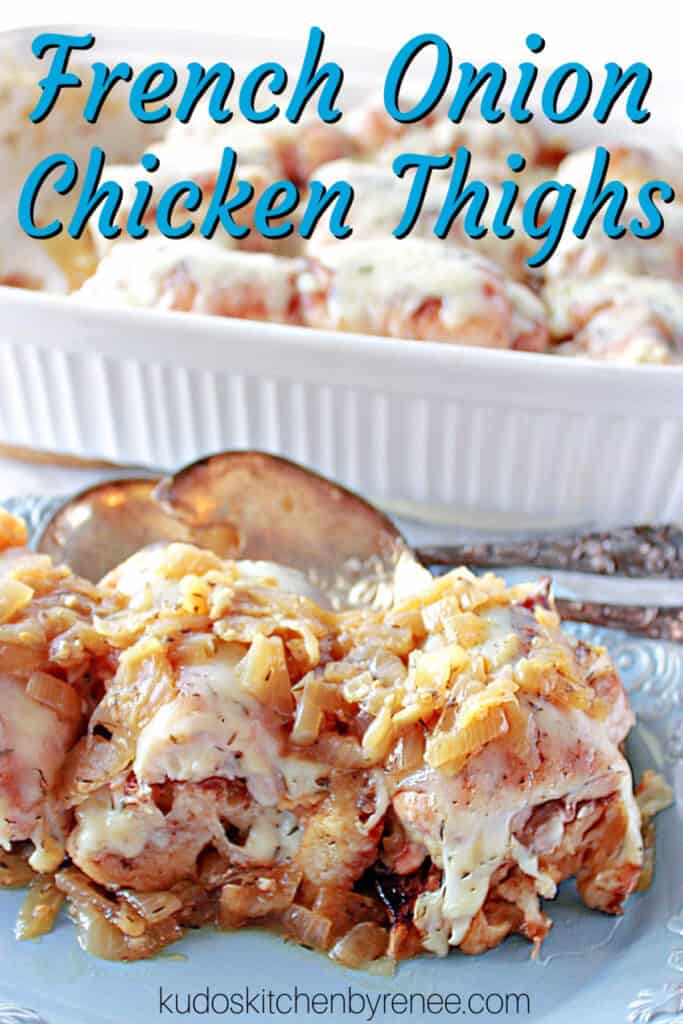 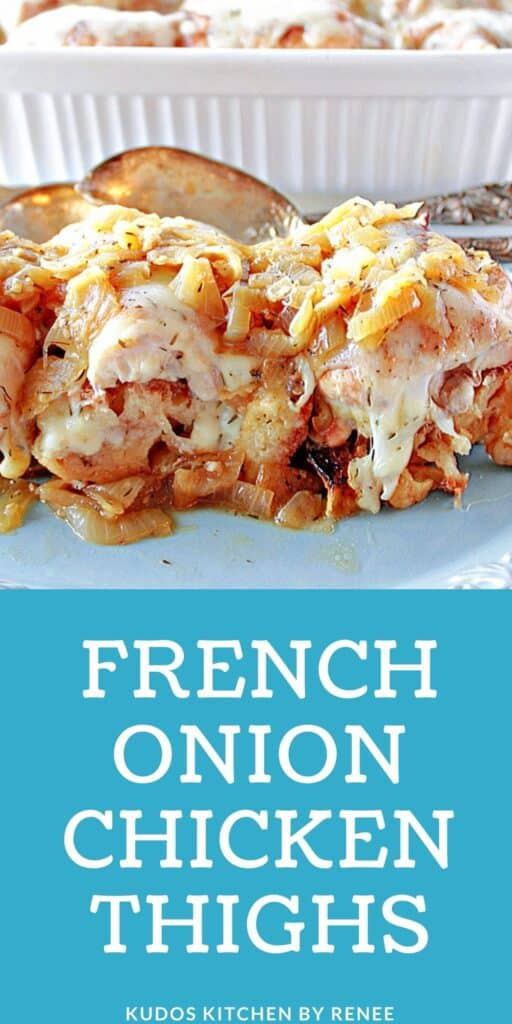 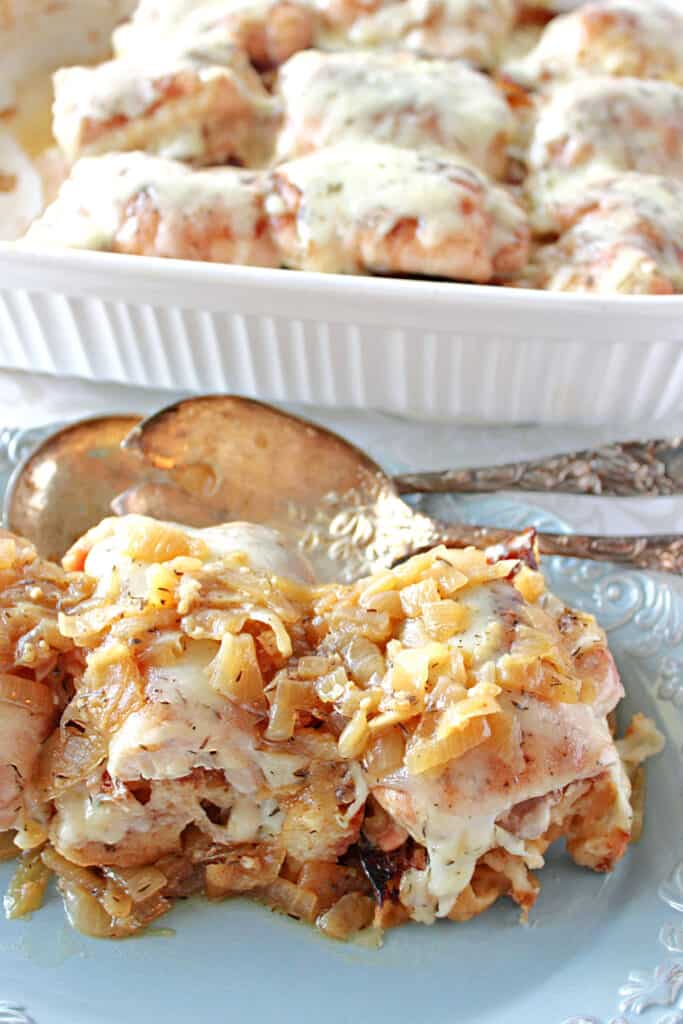 I took my inspiration for this dish of French Onion Chicken Thighs from everyone's favorite soup, and these results are out of this world delicious!!!

**Please Note - The printable recipe card with detailed instructions, complete ingredient measurements, and nutritional information for making French Onion Chicken Thighs is available at the end of this post. OR you can hit the "jump to recipe" button (found above) to be taken directly to the recipe.

When it comes to French Onion soup, I can't decide what my favorite part about the soup is.

Whether it's the deep rich broth, the abundance of sweet caramelized onions, the hearty slice of bread crouton that's soaked in the broth and floats the perfectly browned and melted cheese.

Since I love every part of the soup, I've incorporated every part into this recipe, including the bread crouton. It acts as a platform for the moist and meaty chicken thigh and the melted cheese!

If I'm totally honest, the highest viewed recipe on my blog is this one for French Onion Pork Chops, so I figured I'd be smart to give some of that same love to the chicken.

After all, why should only the pork chop stand alone when it comes to all that French onion deliciousness?

What I wrote about this recipe for French Onion Chicken in 2016:

Even though my husband and I are "empty-nesters" I still can't seem to cook for only two people. Call me crazy, but I like to have plenty of leftovers so during the week I won't have to cook as often, and because my husband likes to take the leftovers to work the next day for lunch.

The day Mark took these leftovers to work, he called me from the office to tell me how much he enjoyed his lunch, and that it was even better than what he'd remembered from the night before.

I'm also very lucky that our two sons come over relatively often to see what's in the fridge.

I'm happy and thrilled to report that they both enjoyed this dish as much as we did the very night I made it and that it garnered a full two thumbs up from the entire family.

How long does this recipe take from start to finish?

Making French onion chicken thighs is easy, and the only thing that requires time is the caramelizing of the onions which take approximately 20 minutes.

From there the assembling of the other ingredients is pretty speedy.

The oven time is 35-40 minutes so you can rest and have a glass of wine, or help the kids with their homework while the oven does the remainder of the work.

Can chicken breast be substituted for the chicken thighs in this recipe?

Yes, but you may need to cut the breasts in half so they fit neatly on top of the French bread.

Also, be aware that the cooking time will be different if using chicken breast in place of the chicken thighs.

Can bone-in skin-on chicken thighs or breast be used for this recipe:

Yes, but be aware that the cooking time will be longer using bone-in chicken (breasts or thighs) then with a boneless selection of chicken.

What is the proper internal temperature for cooked chicken?

A chicken is properly cooked when an instant-read thermometer reaches 145-degrees.

Can the wine be left out of this recipe?

Feel free to substitute additional broth or even apple juice or cider in place of the wine if desired.

Learn how to caramelize onions quickly from ATK:

All the flavors you love in a traditional French onion soup are captured in this recipe for French Onion Pork Chops. Make them ASAP and I promise you won’t be sorry!

When you want to frugally feed a crowd for game day, or a hungry family at dinner, it doesn’t get much tastier than French Onion Sloppy Joes!

Turkey deli meat, smoked cheddar cheese, red bell pepper, and caramelized onions come together in an ultimate grilled cheese sandwich like no other. If you’re anything like me, you are going to love it!!

*French Onion Chicken Thighs (shown below) THIS IS THE PLACE!!

Below is the printable recipe card along with the exact ingredient measurements and nutritional information for making today's French onion smothered chicken thighs. 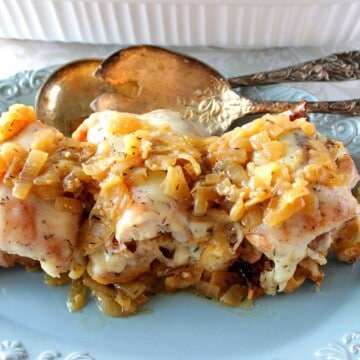 I sincerely hope you've enjoyed today's delicious chicken thigh recipe for French Onion Chicken as much as I've enjoyed bringing it to you!