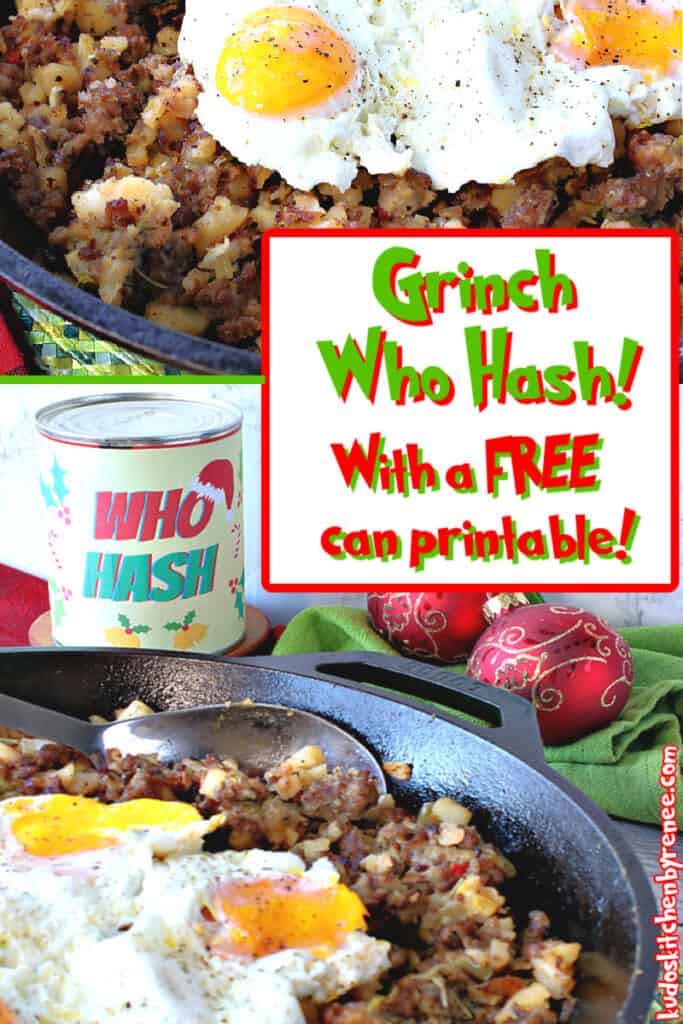 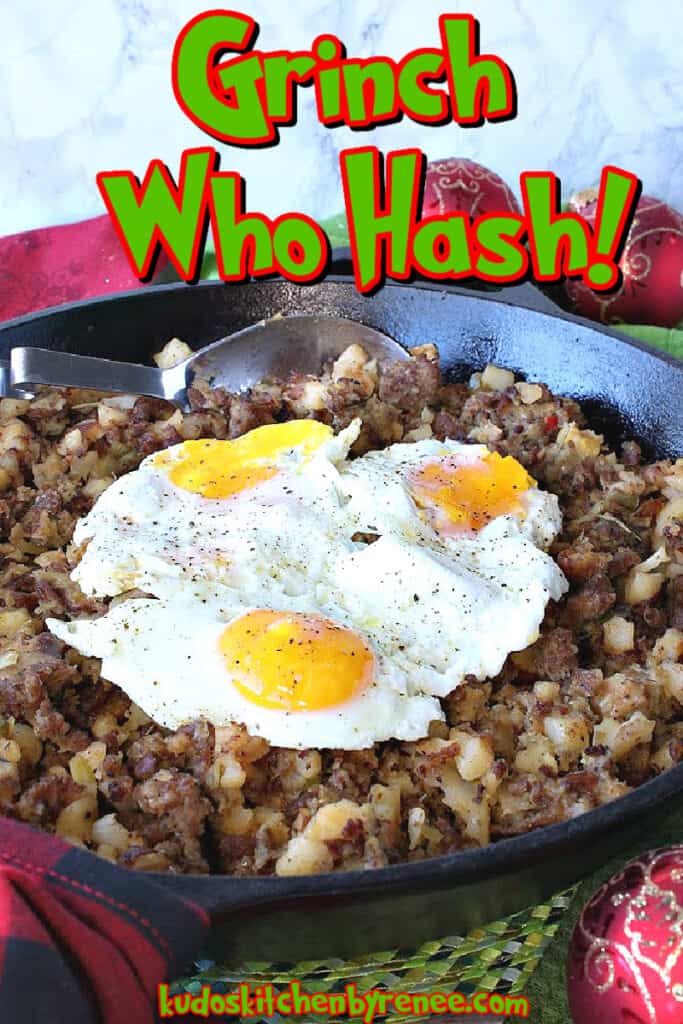 "He cleaned out that icebox as quick as a flash, why the Grinch even stole their last can of Who hash!" - Dr. Seuss

Grinch Who Hash is a combination of stuffing, O'Brien potatoes, and pork breakfast sausage.

It's perfect for breakfast, lunch, or dinner. No wonder the Grinch took it...because it's a winner!

**Please Note - The printable recipe card with detailed instructions, complete ingredient measurements, and nutritional information for making Grinch Who Hash is available at the end of this post. OR you can hit the "jump to recipe" button (found above) to be taken directly to the recipe.

Every year, without fail, we watch How the Grinch Stole Christmas.

It kind of became our official way of kicking off the Christmas season.

When our kids were little, naturally we'd watch with them.

But now that we're empty nesters, my husband and I still find ourselves in front of the television, mimicking every action and word, because we pretty much know the entire script and lyrics to all the songs by heart.

This year, however, when the Grinch stole that last can of who hash, I had an idea...

If I can't buy Grinch Who Hash in the store, I'll make it instead!

This recipe is a great way to use leftover stuffing.

This year I had plenty of Pretzel Roll Stuffing leftover from Thanksgiving.

After watching the Grinch, I decided I'd incorporate some of those leftovers into the Who Hash and the results are simply amazing!

No leftovers? No problem!

Of course, you don't need to use leftovers to make Grinch Who Hash.

You can easily use a prepared box stuffing mix, and I'm certain the results will be just as delicious!

After all, WHO doesn't love boxed stuffing?! I know I do!!

Get your FREE Grinch Who Hash Can Label!!

"You're a mean one, Mr. Grinch. You really are a heel.
You're as cuddly as a cactus. You're as charming as an eel.
Mr. Grinch! You're a bad banana with a greasy black peel!"

"You're a monster, Mr. Grinch. Your heart's an empty hole.
Your brain is full of spiders. You've got garlic in your soul.
Mr. Grinch! I wouldn't touch you with a thirty-nine-and-a-half foot pole!"

You're a vile one, Mr. Grinch. You have termites in your smile. You have all the tender sweetness of a seasick crocodile.

Mr. Grinch! Given the choice between the two of you, I'd take the seasick crocodile!

You're a rotter, Mr. Grinch. You're the king of sinful sots.
Your heart's a dead tomato splotched with moldy purple spots.

Mr. Grinch! You're a three-decker sauerkraut and toadstool sandwich with arsenic sauce!

How to make Grinch Who Hash:

*Grinch Guacamole (shown below and in the featured video)

With a few simple ingredients and some easy instructions, you can warm the hearts of your family and friends with this gloriously easy to make realistic looking Grinch Guacamole.

*Grinch Who Hash (shown below) THIS IS THE PLACE!!

Below is the printable recipe card along with the exact ingredient measurements and nutritional information for making today's fast and easy stuffing hash recipe, Grinch Who Hash!

If you've made this recipe, or are excited to make this recipe, I'd appreciate it if you'd take a moment to leave it a star rating on the recipe card, along with a comment if you're so inclined. Thank you. 🙂 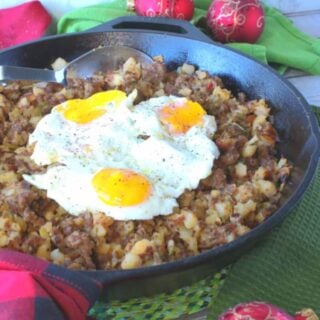 I sincerely hope you've enjoyed today's easy and quick breakfast, brunch, dinner, or lunch recipe for Grinch Who Hash using leftover stuffing as much as I've enjoyed bringing it to you!