Looking for a new “twist” on serving spaghetti? Look no further. Spaghetti Stuffed Bell Peppers will surprise and delight the entire family. 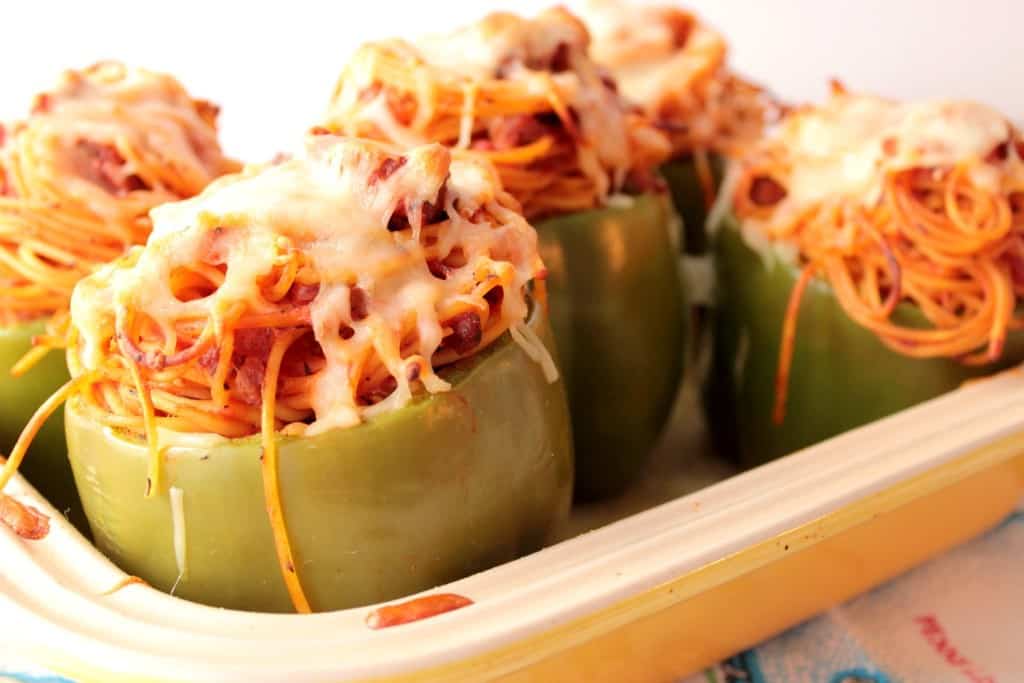 Sometimes I do my best thinking while laying awake in the middle of the night trying to fall back asleep. It’s not the ideal situation, but it happens, more times than I care to admit. It was on one of those restless nights that I came up with the idea of stuffing green peppers with spaghetti. 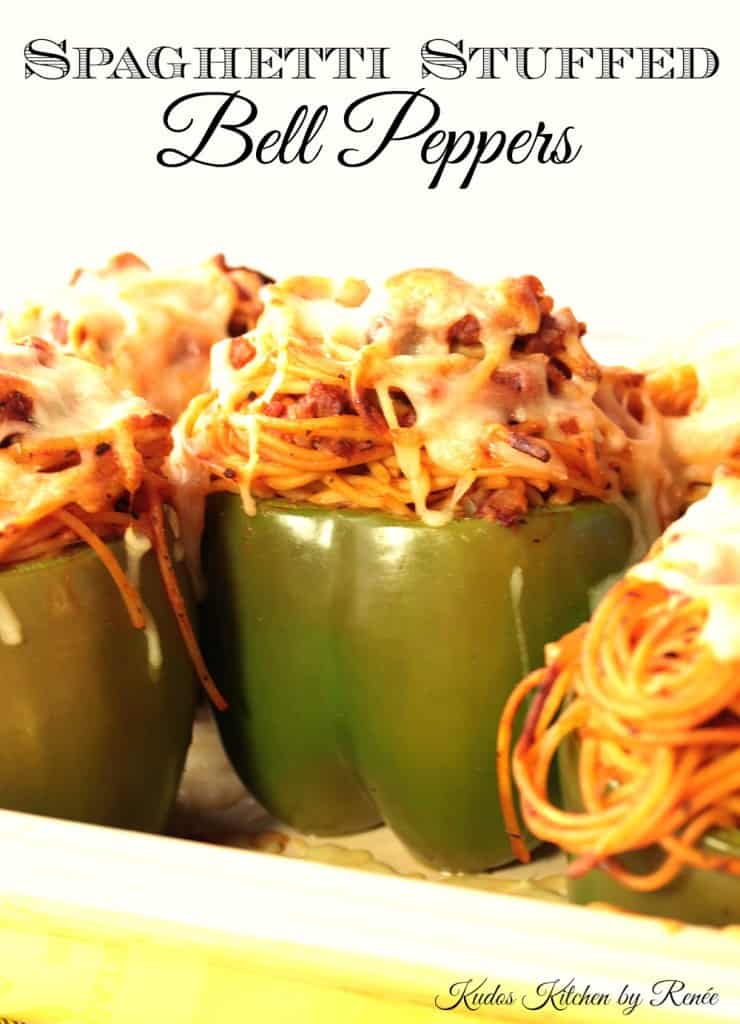 Don’t you just love when a simple single ingredient, like a green bell pepper, can be used as a vessel to house other delicious ingredients? Me too. And, if you have picky eaters in the family, this may be the way to get them to try something they may have otherwise turned their nose up at. After all, who doesn’t like spaghetti, and who wouldn’t be surprised and delighted to see it served in this unexpected way? 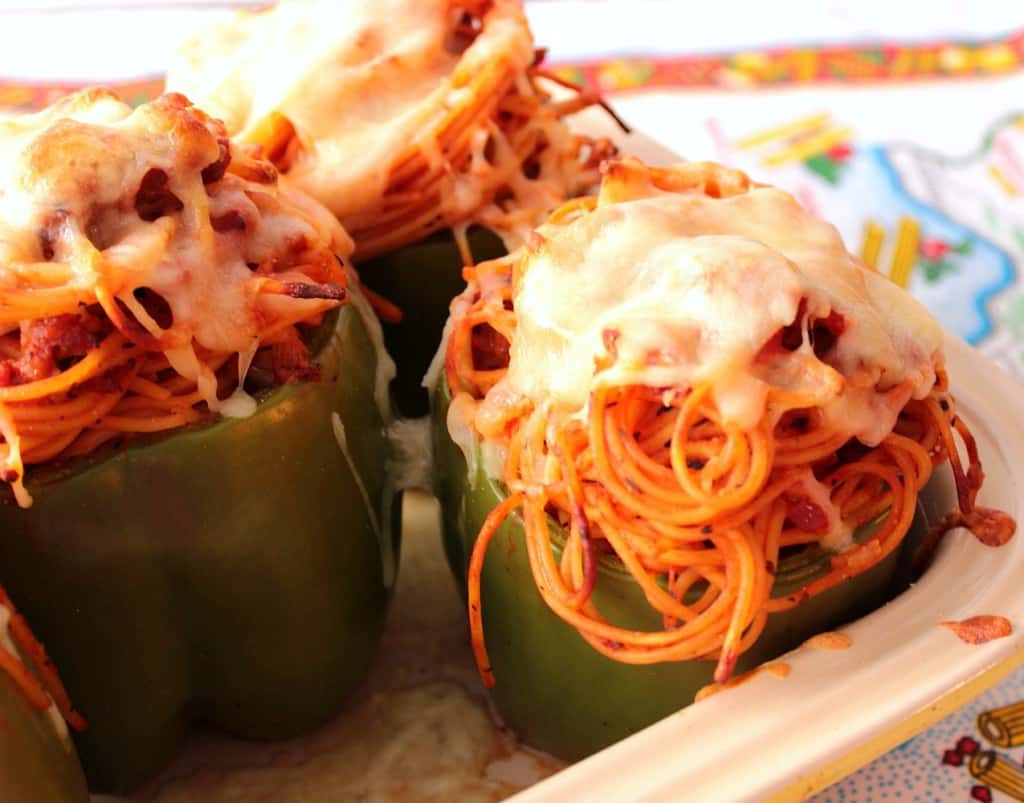 Ready to make your own Spaghetti Stuffed Bell Peppers? Here’s how…

In a large, high sided skillet, brown the Italian sausage along with ½ teaspoon of the basil, oregano and thyme. Add the diced onion and bell pepper. Cook, stirring occasionally until the sausage is no longer pink.

Add the tomato purée along with the remaining basil, oregano, thyme, salt, pepper, and Parmesan cheese. Simmer for 5 minutes.

Add the cooked and drained spaghetti to the pan and toss well to coat. Place the softened peppers in a prepared baking dish. Use tongs to fill the peppers with the prepared spaghetti. Bake for 20 minutes in a preheated 350 degree oven. Remove the peppers from the oven and top each one with shredded Mozzarella cheese. Return the peppers to the oven and continue baking for an additional 10 minutes or until the cheese is melted. Serve hot. 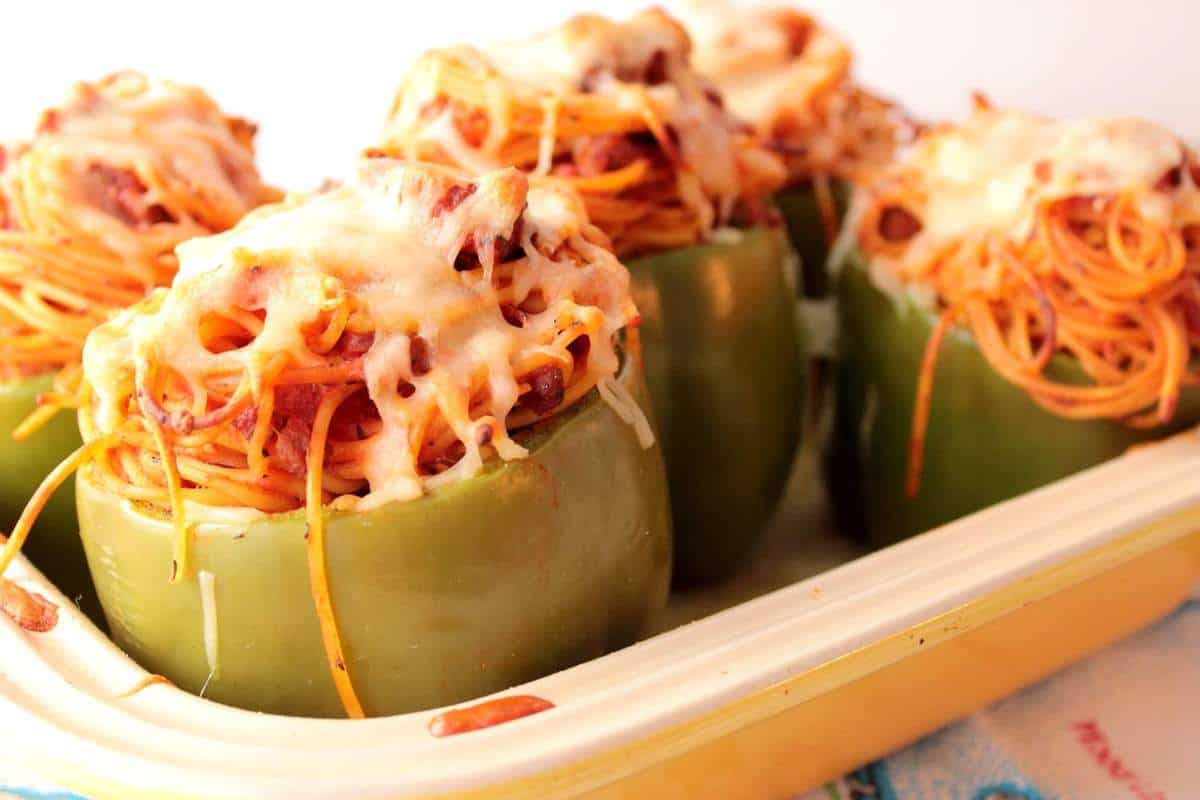 Before cooking, check each pepper to see if they stand straight. If needed, slice a teeny tiny bit of green pepper from the bottom to level them and to prevent them from falling over when filled.
The sausage in this recipe can be omitted if desired. If omitting, cut back on the amount of dried basil, oregano and thyme used as you won't need as much to season the spaghetti.
Tried this recipe?Let us know how it was! 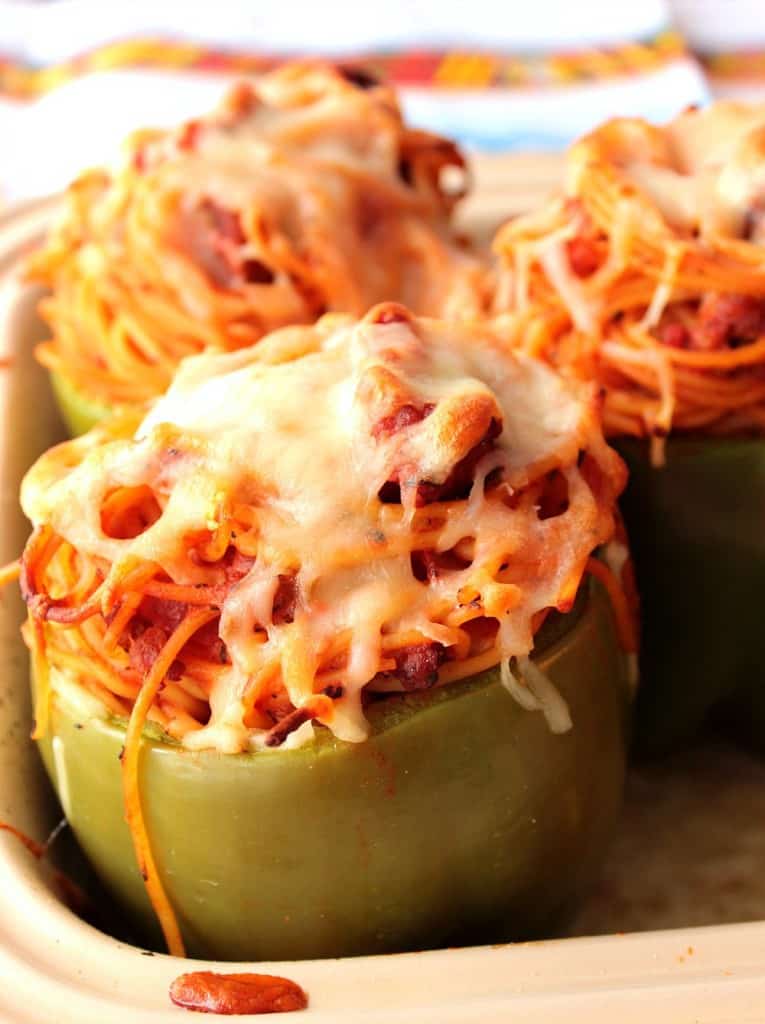 Other than spending time in my kitchen cooking and baking, my favorite pastime is painting. My all-time favorite things to paint are food blogger logo aprons. Here’s one I painted not that long ago for my blogger friend, Kirsten of Comfortably Domestic. Doesn’t she have the cutest logo? All of the aprons and flour sack towels I paint are completely washable and are bright and vivid. They’re perfect for wearing at home while cooking and baking up a storm, and they’re a super cool way to brand yourself should you ever be lucky enough to appear on TV in a food segment. I’m betting that it won’t be long before Kristen has her time in the spotlight on TV. She is super personable, and her recipes are amazing! 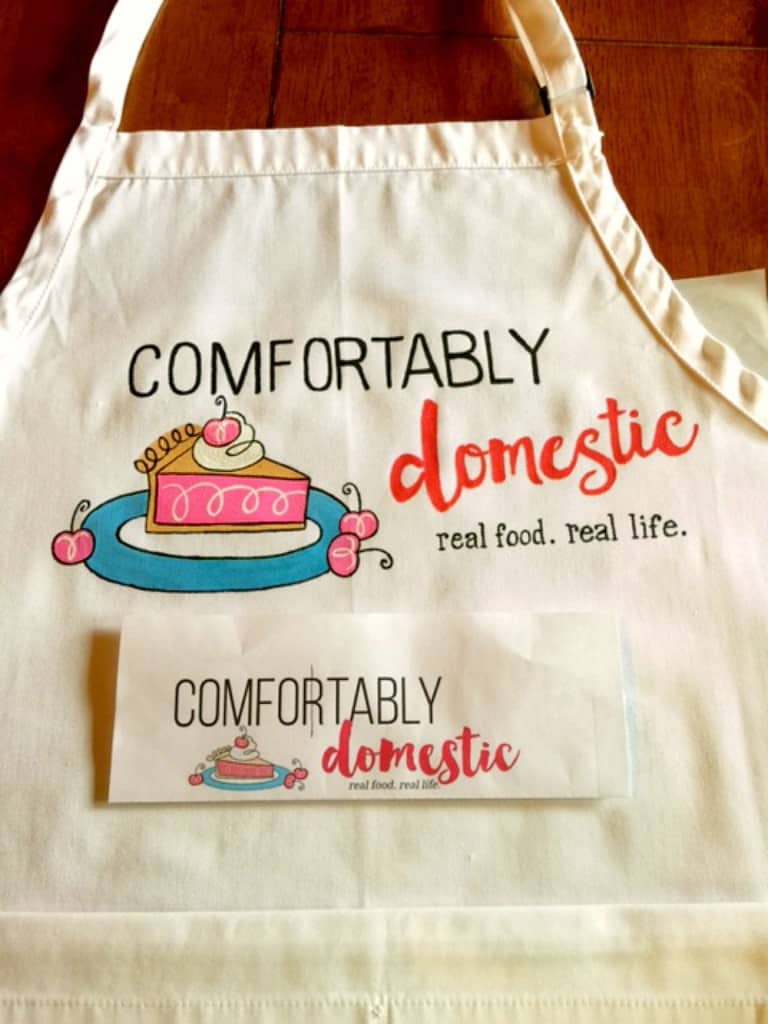 If there is ever anything I can paint for you, from fabrics (aprons and tea towels) to glassware items, please don’t hesitate to contact me by clicking on the little envelope icon found at the top of my site, or by visiting my shop on Etsy and Wazala. Custom orders (like logo aprons) are always welcome and are available in white and black.

Kudos Kitchen by Renée ~ Where food, art, and fun collide on a regular basis.

Heather | All Roads Lead to the Kitchen

This is such a fun idea, Renee...who can resist a fun (and edible) serving vessel like a bell pepper!

These are SO fun! Why have I never come across them before?? Great idea!!

Because I hope I came up with the original idea. That said, it won't be original for long. Glad you like it. Thanks!

Such a great idea. My kids would love this!!

This is such a clever idea! I have a feeling that my family would just love this. :)

What a great idea! Simple and fun!