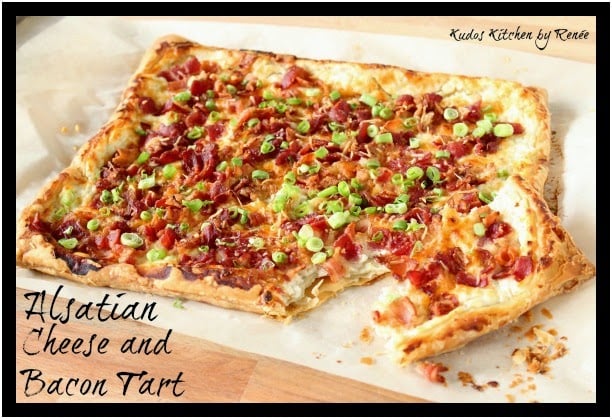 A few weeks ago I had the distinct displeasure of biding my time in a hospital waiting room for hours on end waiting for news about a beloved family member. Sadly, I think we’ve all been there in one form or another and we’ve all had to rely on whatever magazines happen to be there to help pass the slowly ticking hands on the clock. This recipe for Alsatian Cheese and Bacon Tart comes from one such magazine. It’s out of the 2006 (yep you read that correctly, only 12 years old) Gourmet Magazine, and I consider myself lucky to have found it!

My husband’s family is Alsatian (Alsace is a region in Northeastern France, which has passed between French and German control many times during the course of its history), and I don’t have  many any Alsatian recipes in my repertoire. And, if I’m totally honest, I sadly only have one recipe that was handed down from my mother-in-law, Dorothy before she passed away and it’s for Grandma G’s Anise Cookies. I honestly don’t know if this cookie is of Alsatian descent, but I’m going to go out on a limb and say it is. This Alsatian Cheese and Bacon Tart will be my second, and by far my favorite, as I’m not a huge fan of the taste of the anise cookies. LOL (Sorry to my husband’s family).

Seeing this particular recipe in the old 2006 Gourmet Magazine felt almost like divine intervention to me and kind of like I was receiving a message from above. You see, the beloved family member we were waiting in the hospital for news on was my soon to be 94-year-old father-in-law who is in failing health, but has more spunk and gumption than anyone I’ve ever known. His taste in food has always been rather simple (meat and potatoes) and he’s not nearly as adventurous as what I sometimes like to play with in my kitchen, but how could I possibly ignore a recipe that looks this fantastic and has the name “Alsatian” in its title? I can’t…and I’m glad I didn’t.

This Alsatian Cheese and Bacon tart is totally yummy, and if I thought it would puree well, I’d make sure my father-in-law would get a few big slices to enjoy. I only wish I would have seen this recipe five years sooner so he could have enjoyed  the non-pureed version with us! I know (at least I think I know), he would have loved it as much as we did. 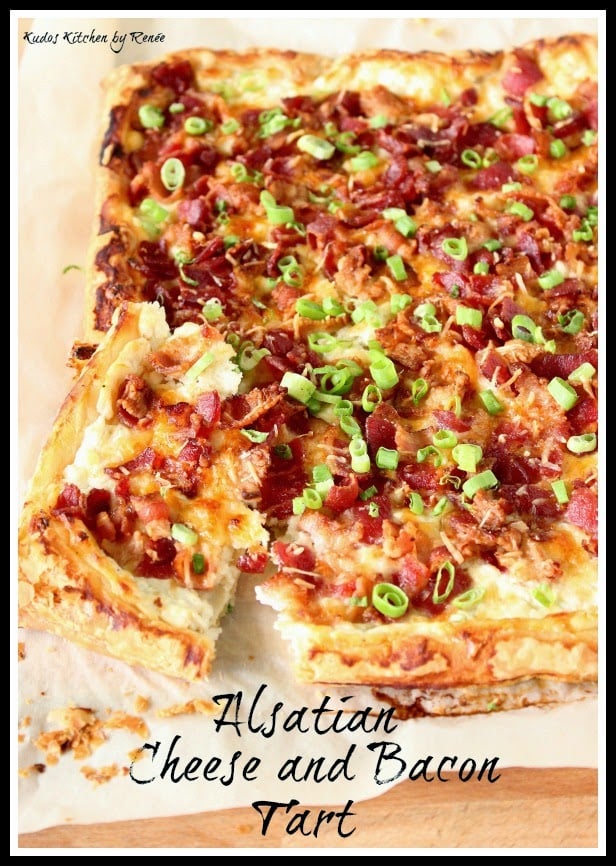 While a full rectangular tart is a fun and pretty thing to make, I decided to use the second puff pastry dough that comes in the box to also make some individual round appetizers. The method and ingredients are exactly the same as making the full tart, the only difference is that I used a round biscuit cutter to cut out circles of the dough before topping and baking. I think these would be super cute on a buffet table or as pass-around hors d’oeuvres for your next cocktail party. 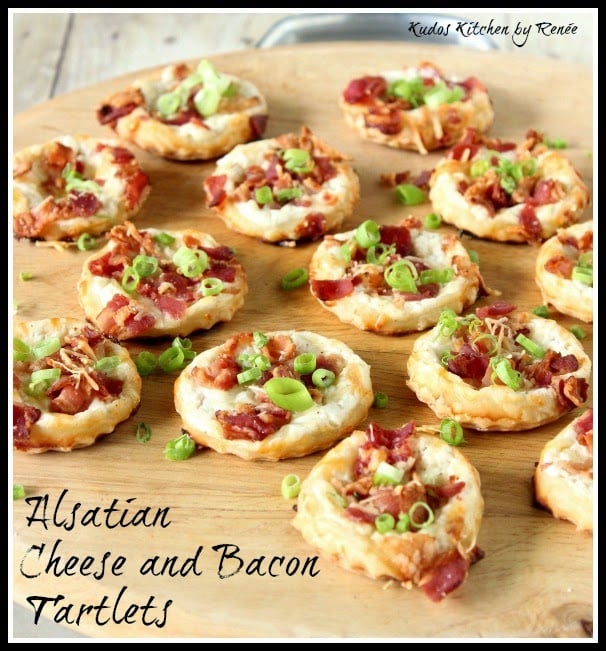 -Preheat oven to 400 degrees.
-Roll out the pastry sheets on a lightly floured surface. If making individual tartlets, use a biscuit or cookie cutter to cut the dough into rounds.
-Transfer the dough onto parchment lined baking sheets.
-In a medium sized bowl, stir together the cottage cheese, sour cream, salt, pepper and 1/2 cup of the Parmesan cheese.
-Spread the filling evenly on top of the pastry, making sure to leave about a 1″ border (for the rectangle tart). *Note – If making the round tartlets, place a even dollop of cheese directly in the center of each round.
-Spread the partially cooked bacon evenly over the cheese filling and top the tart with the remaining 1/2 cup of Parmesan cheese.
-Bake in a preheated oven for approximately 50-60 minutes or until the puff pastry is golden brown and flaky.
-Remove the tart from the oven and immediately sprinkle evenly with the chopped scallions.
-Cool and serve. 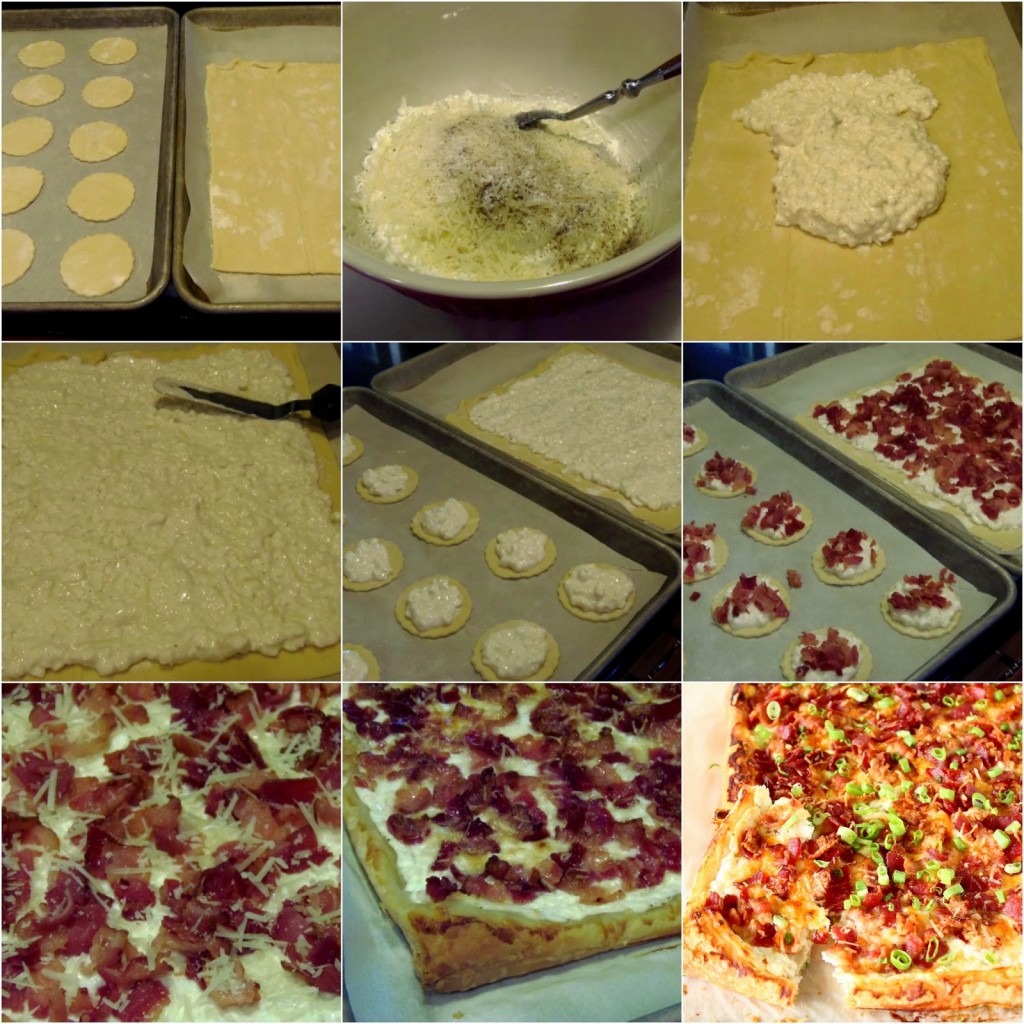 My father-in-law has since been able to move back home and is under hospice care. His attitude is good and as he’s said so himself, he’s led a good long life. We pray that when the time comes, that he’ll pass painlessly and with his family surrounding him. The thing that ultimately gives us all the most comfort is knowing that his wife Dorothy will be waiting there with open arms to welcome him home.

Until we eat again,
I send you love… and good food 🙂

Can you use cream cheese instead of cottage cheese?

Cream cheese would be delicious!!! Great idea. I'd just thin it out with a bit of milk so it's easy to spread over the delicate pastry. You can add some fresh herbs too. Maybe thyme or a little bit of rosemary. Gosh, now you've made me really hungry. LOLRenee

haha... i want to eat again too :-Dvisit our website : jual kacamata

I hope your father-in-law sees some better days ahead. Will keep your family in our prayers. This tart looks amazing! Good thing that that old magazine never got thrown out or worse, someone ripped the recipe out of it before you had a chance to try it!

Will keep your family in my thoughts and prayers Renee! This is a lovely recipe that speaks highly of Alsace. (One of my fave chefs, Hubert Keller, is from there - if you ever want to check out his recipes).

I love the idea of making them in little tarts. Great to snack on