This past weekend I was invited to a Chicago Bear’s football/housewarming party (actually my husband and I were both invited but because he already had tickets to attend the game, I went to the party myself) and my friend, who was throwing the party, asked if I would mind bringing an appetizer. Me? Mind? Surly you know me by now, right? LOL 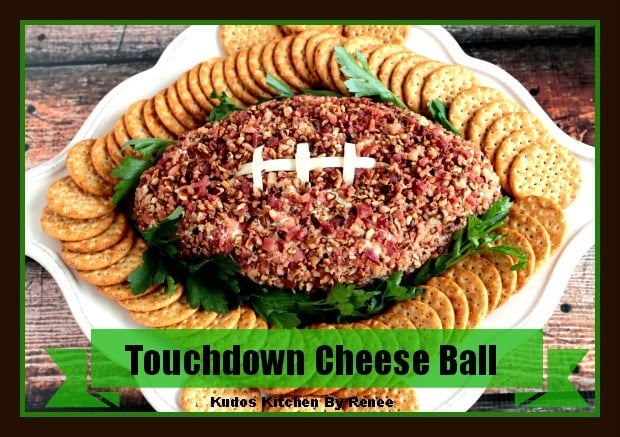 I’d thought long and hard about what I wanted to bring to the party and I finally came up with this cute idea for a football cheese ball. It’s was super easy to make, requires no cooking (except to toast the pecans) and just a minimal amount of mixing. Just make sure that the cream cheese if softened to room temperature before you start mixing and it comes together very quickly. 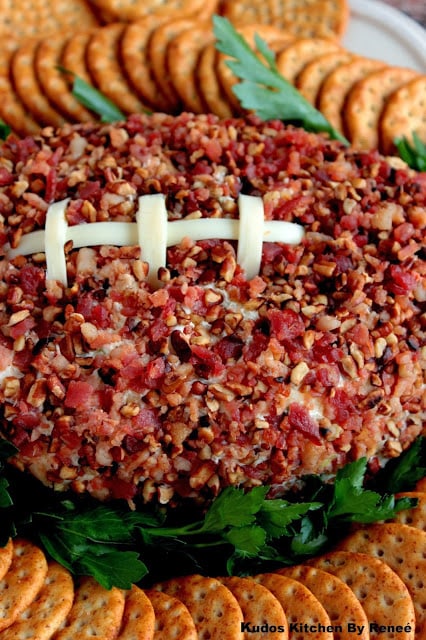 -Toast the pecans in a dry skillet over medium/low until you just start to smell them. Cool completely and set aside.
-In the bowl of a stand mixer with the paddle attachment (or a large bowl with a hand mixer), blend the cream cheese, horseradish sauce, green onions, pimentos, 2 ounces of the bacon bits, salt and pepper until combined.
-Stir in the cheddar cheeses until they’re well incorporated.
-Working with wet hands (so the cheese doesn’t stick so much), shape the cheese mixture into a football shape on a chosen platter.
-Combine the remaining bacon bits and the toasted pecans in a bowl and generously press them onto the football making sure to cover the entire shape.
-Brush the bacon and pecans that don’t stick off the serving platter.
-Using a pairing knife, cut small strips of the string cheese to form the laces of the football.
-Using a chop stick or skewer, stick the ends of the string cheese into the cheese ball to “attach” and press with your fingers to cover any hole that you’ve just made with the skewer (this will also anchor the laces to the football).
-Arrange some parsley around the football as garnish.
-Serve at room temperature with assorted crackers. 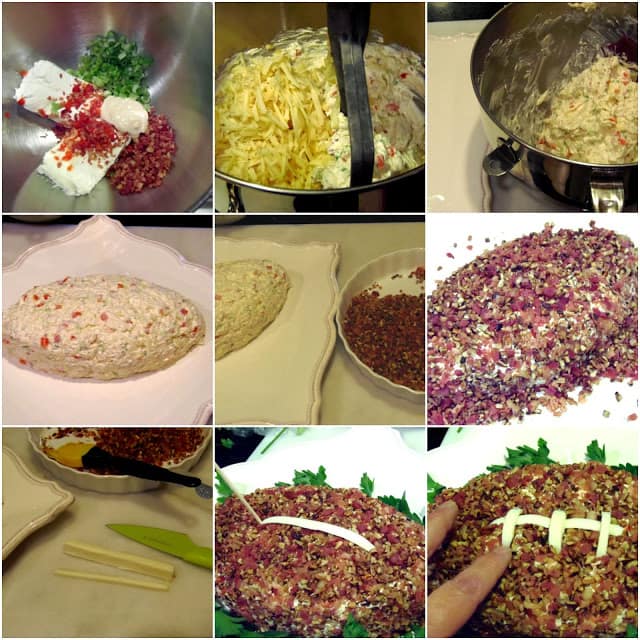 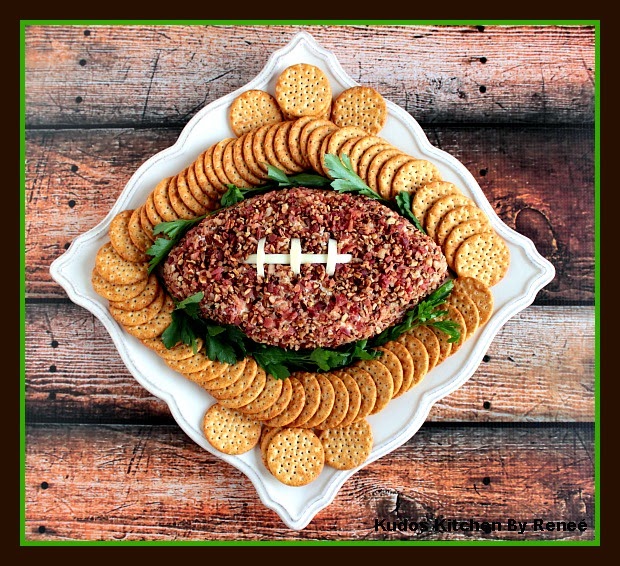 SCORE!!! The Chicago Bear’s win on overtime over the Baltimore Ravens 23 to 20! Sorry all you Ravens fans out there, but I live with a bunch of bears in a bears den! Grrrrrr. And, needless to say my hubby came home one happy camper that night!  Life is good 🙂

Kudos Kitchen By Reneé ~ Where food and art collide on a regular basis!

I’m happily linking up this post to Sweet Bella Roos – Pin It Thursday and The Chicken Chick – Cleaver Chicks Blog Hop and The Freshman Cook: Superbowl Link Party.
Thanks for the lovely party!

I am so excited to make this for the Super Bowl on Sunday! (Would also be interested in more info about the team serving tray and glasses) Thanks!! :)