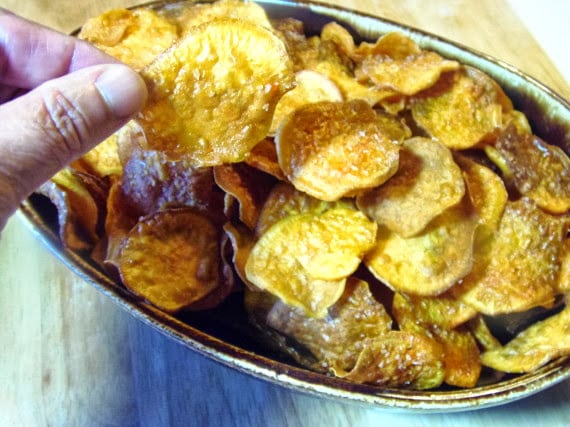 I hate to be rude but,

I’m excited to tell you

that for this week’s #SundaySupper theme of crunchy foods,

I got to make something I’ve been wanting to make for a long, long time…

Not any old potato chips, mind you. Smoky Sweet Potato Chips that I just could NOT stop munching and crunching on!

See what I mean? LOL

So satisfying! So delicious! So LOUD!! 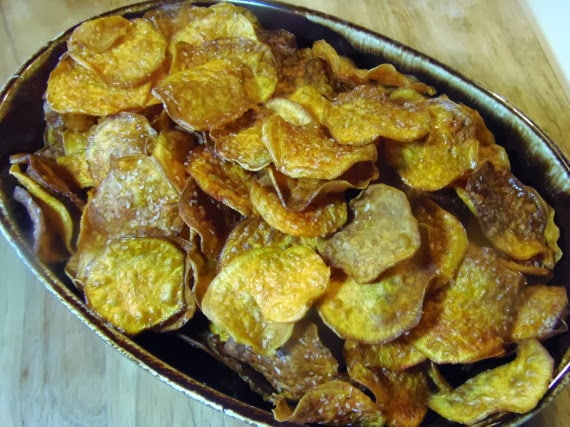 -Using the mandolin or chef’s knife, slice the sweet potatoes, width wise, into extremely thin slices but not so thin that you can see through them.
-After slicing the potatoes, place them in the water making sure to separate each slice.
-Allow the sliced potatoes to sit in the water for a few moments while you prepare a baking sheet with layers of paper towels.
-Arrange the sliced, soaked potato slices evenly and in layers, on paper towels.  *IMPORTANT – Drying the potatoes on the paper towels insures that the hot oil won’t spit and sputter while frying the chips.
-Meanwhile, in a large Dutch oven, heat the peanut oil over medium heat until the oil reaches 325 degrees Fahrenheit.
-While waiting for the oil to heat, use a small bowl to mix together the salt, paprika, cinnamon and nutmeg,
-Working in batches and using a slotted spoon, carefully lower some of the sweet potato slices into the hot oil.
-Watch them carefully in the hot oil and turn them occasionally using the slotted spoon until they are slightly browned and crunchy.
-Remove the fried chips from the oil, using the slotted spoon, and place them on paper towels to drain.
-Immediately after the chips are removed from the oil, sprinkle them evenly with the salt mixture and continue frying the remaining potato slices. 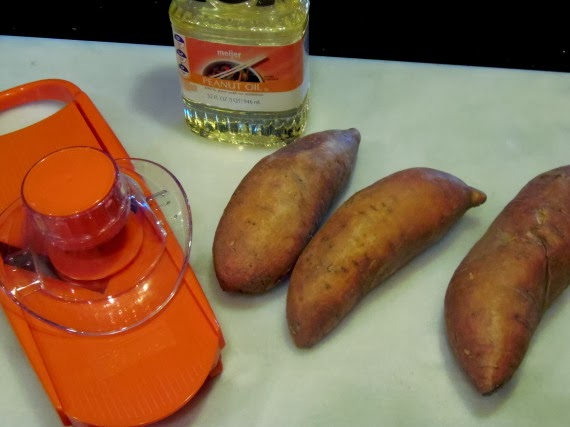 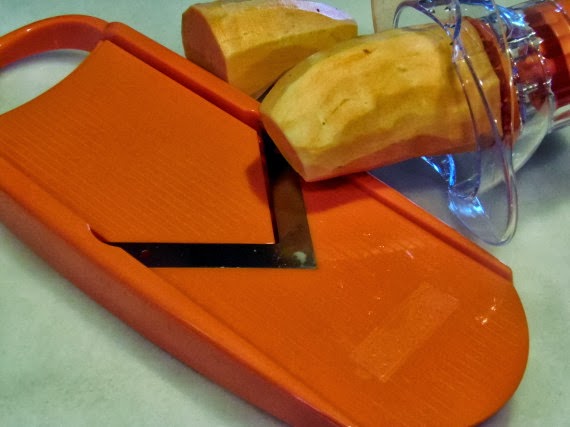 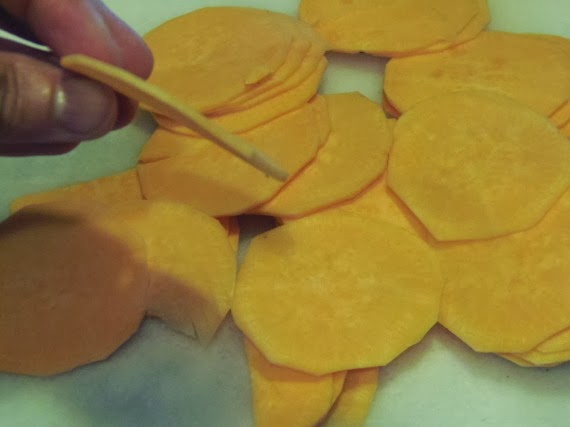 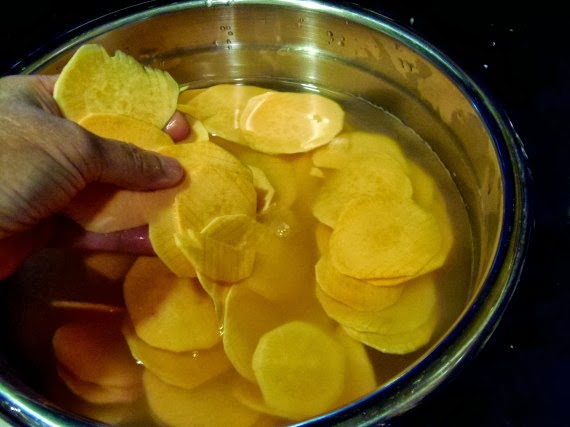 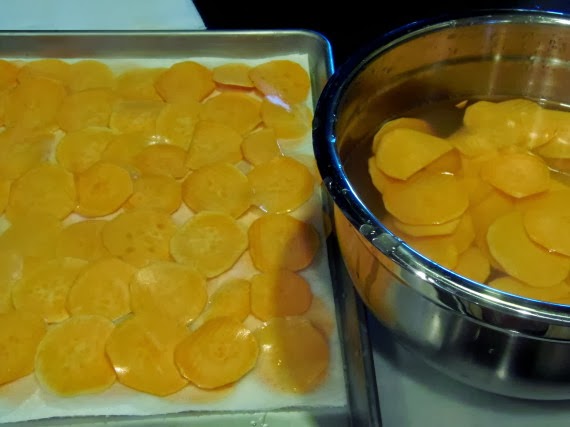 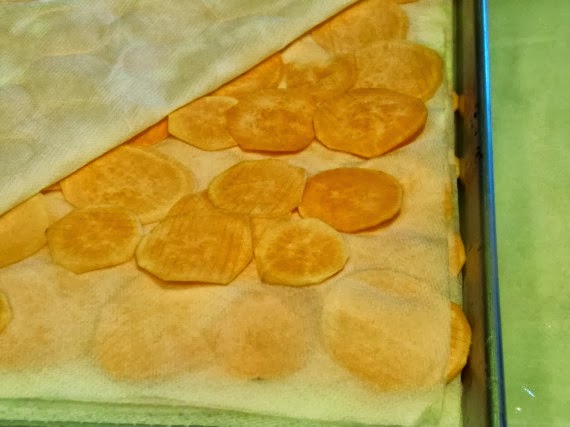 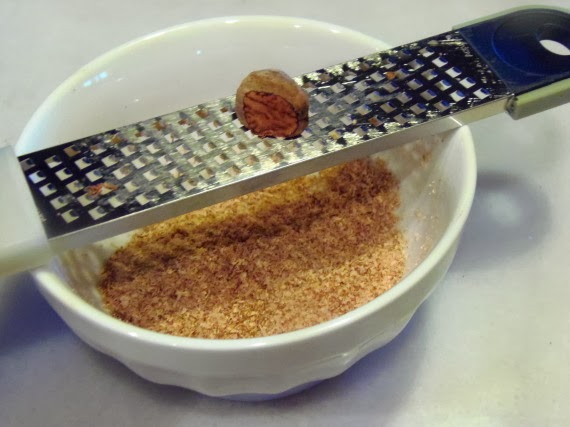 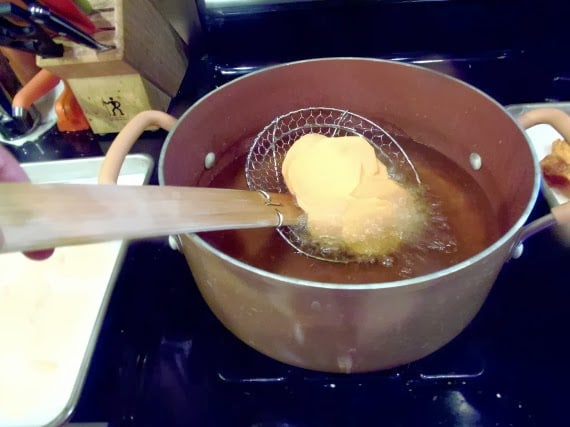 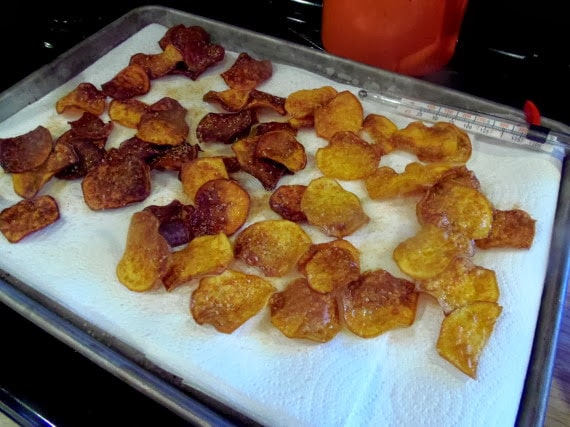 At this time I’d like to give a big crunchy shout out to Susan of The Girl In The Little Red Kitchen for setting the table and hosting this week’s delicious #SundaySupper event. Thank You so much Susan!

If you’re in the mood for even more crunchy goodness, check out all the links below and see all the other undeniably delicious and wonderfully crunchy foods that will satisfy and inspire you to get your crunch on in the kitchen!

Bitterballen from The Urban Mrs.Caprese Wontons from Jane’s Adventure in DinnerCrispy Broccoli Cheddar Bites  from Curious CuisiniereNaanchos from Bobby’s Kozy KitchenWaldorf Salad from Noshing With The Nolands

Join the #SundaySupper conversation on twitter on Sunday! We tweet throughout the day and share recipes from all over the world. Our weekly chat starts at 7:00 pm EST. Follow the #SundaySupper hashtag and remember to include it in your tweets to join in the chat. Check out our #SundaySupper Pinterest board for more fabulous recipes and food photos. 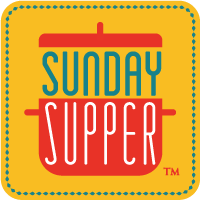