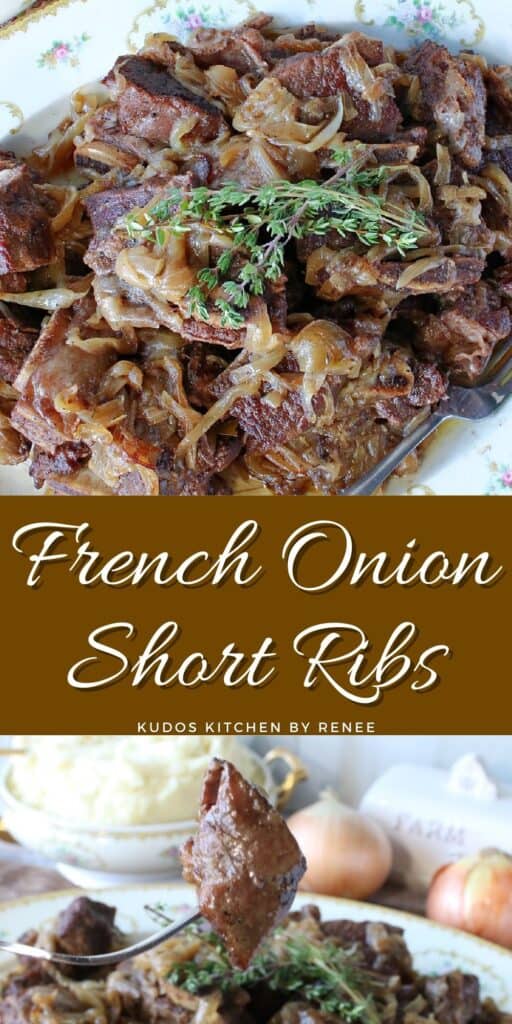 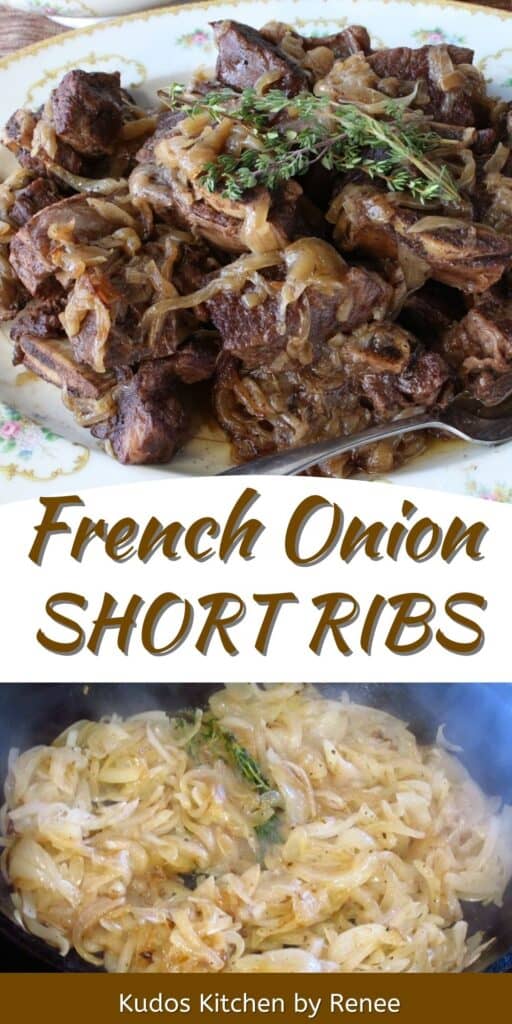 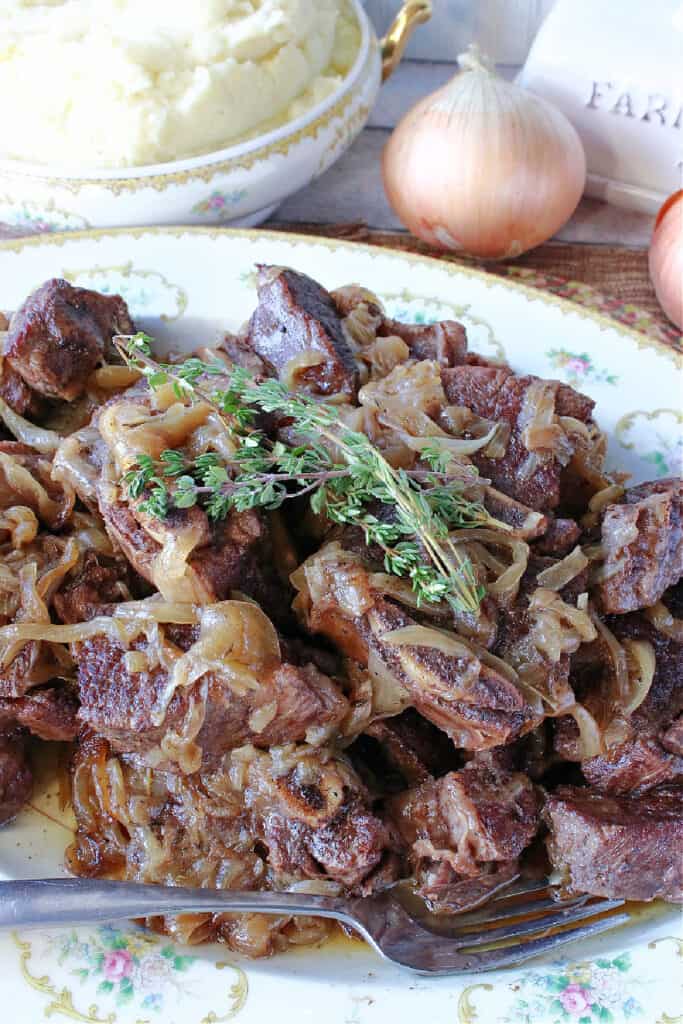 French Onion Short Ribs are a profoundly flavorful, easy-to-make entrée that will wow your friends and family with the oven doing most of the work!

**Please Note - The printable recipe card with detailed instructions, complete ingredient measurements, and nutritional information for making French Onion Short Ribs is available at the end of this post. OR you can hit the "jump to recipe" button (found above) to be taken directly to the recipe.

Table of Contents hide
The ingredient list:
Kitchen tools and equipment needed:
How long will it take to make French onion beef short ribs:
What is a Dutch oven and why is it important?
What brand of Dutch oven to choose:
How to pick an affordable Ducth oven:
What size Dutch oven is best for this recipe?
Learn even more about Dutch ovens and Dutch oven cooking.
What is braising?
Can dried thyme be used in place of fresh for this recipe?
The step-by-step photos for making braised short ribs with caramelized onions:
Additional recipes using caramelized onions:
FRENCH ONION SHORT RIBS
Ingredients 1x2x3x
Instructions
Nutrition
Like and Subscribe to my Kudos Kitchen channel on YouTube. See you there!!

How long will it take to make French onion beef short ribs:

To lightly caramelize the onions will take approximately 20 minutes.

To sear and braise the ribs in the Dutch oven will take approximately 3½ hours.

All total you're looking at about 4 hours, so please plan accordingly.

What is a Dutch oven and why is it important?

A Dutch oven is a heavy-duty pot with a lid used for browning meat and vegetables. It can be used on top of the stovetop or in the oven for roasting and braising.

Typically a Dutch oven is made from heavy cast iron which is best for maintaining a proper temperature and will last a lifetime if properly cared for.

An enamel-coated cast-iron Dutch oven will also add a lovely pop of color to your kitchen and make for easier cleanup with a lot less lifetime maintenance.

What brand of Dutch oven to choose:

That all depends on your budget, and what you're willing to spend.

Dutch ovens can get very expensive, but you can find some very good alternatives that won't cost an arm and leg and will still be a trusted workhorse in the kitchen.

I don't own the very pricey Le Cruset Dutch oven, but I'm happy and satisfied with the lesser-priced Dutch oven I do own.

I own a 7-quart Martha Stewart brand enamel-coated cast-iron Dutch oven that I received as a gift many, many years ago and it's always been dependable and very a good-looking addition to my kitchen cookware arsenal.

How to pick an affordable Ducth oven:

What size Dutch oven is best for this recipe?

A 6 or 7-quart Dutch oven is best suited when cooking for a family or doing large batch cooking as in this recipe for French onion short ribs.

Learn even more about Dutch ovens and Dutch oven cooking.

Braising is a process of cooking foods (meats or vegetables) where you sear them first (to caramelize and build flavor) and then finish the cooking process in a liquid; in this case, it's beef broth and red wine.

Can dried thyme be used in place of fresh for this recipe?

Where I call for 2-3 sprigs of fresh thyme, I'd substitute ¾ teaspoon dried thyme in its place.

Of course, you can always add more if you decide to, but it's always best to add a small amount in the beginning as dried herbs are more pungent in flavor than their fresh counterparts.

*French Onion Pork Chops (shown below and featured in the video)

All the flavors you love in a traditional French onion soup are captured in this recipe for French Onion Pork Chops. Make them ASAP and I promise you won’t be sorry!

When you want to frugally feed a crowd for game day, or a hungry family at dinner, it doesn’t get much tastier than French Onion Sloppy Joes!

Everything you love about French onion soup is in these French Onion Crostini…except for the spoon.

This French Onion Mac and Cheese recipe has got your name written ALL over it, and I’m happily handing it to you! You’re welcome! 🙂

*French Onion Short Ribs (shown below) THIS IS THE PLACE!!

Below is the printable recipe card along with the exact ingredient measurements and nutritional information for making today's beef short ribs with caramelized onions recipe.

If you've made this recipe, or are excited to make this recipe, I'd appreciate it if you'd take a moment to leave it a star rating on the recipe card, along with a comment if you're so inclined. Thank you. 🙂 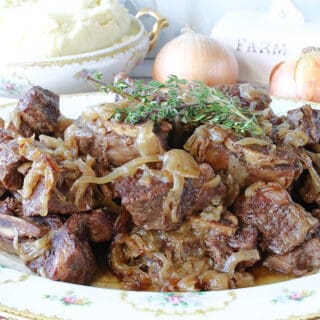 To make the caramelized onions:

To prepare the beef short ribs:

To make the braising liquid:

How to caramelize the onions:

How to prepare the beef short ribs:

How to make the braising liquid:

I sincerely hope you've enjoyed this main course beef recipe for short ribs with caramelized onions as much as I've enjoyed bringing it to you!