Old-Fashioned Grated Sweet Potato Pudding tastes a little like a pumpkin, or sweet potato pie, with the full-bodied flavors of molasses, cinnamon, and freshly grated nutmeg. It's a rustic dessert that is easy to make using simple ingredients and requires no fancy equipment.

**Please Note - The printable recipe card with detailed instructions and complete ingredient measurements for making Old-Fashioned Grated Sweet Potato Pudding is available near the end of this post. OR click on the "jump to recipe" button (found above) to be taken directly to the recipe.

**Note - I'm updating this recipe for Old-Fashioned Grated Sweet Potato Pudding which I originally posted back in October of 2011. I've added new photos, a fun, and fast-paced video, plus a printable recipe card for your ease of use and enjoyment.

I've recently become smitten with all things vintage.  Especially cookbooks and aprons. To me, everything old is new again, and I'm so excited I can hardly contain myself!

It must be because I'm getting up there in age that I'm having a ball imagining myself in simpler times, and then transporting myself there via my love of cooking and baking.

Food is the great equalizer that unites us in time and space. It encompasses our true love of family, friends, and culture.

That being said, the other day on twitter I had mentioned how I had recently discovered my new found passion for vintage cookbooks. Within mere seconds of me putting my original tweet out, Michele of @FunkyChunks tweeted me back asking me what my favorite time period was for my collection?  Having just started collecting, I told her I had not yet discovered it, and I was anxious to see where my collection would take me.

Michele had also told me that she'd been collecting vintage cookbooks for many years, so I was thrilled to find out that she and I now had something new in common.  We ended our tweet conversation, and that was that. Or so I thought. Much to my surprise, look what arrived at my front door a few days later...

You could have knocked me over with a feather when I'd opened the box.  I immediately contacted Michele to thank her for such generosity.
Michele told me she just wanted to help me get started with my collection.  Can you imagine such kindness?
Along with the two awesome cookbooks (circa the 1930's), Michele also included two of her most amazingly scented handcrafted soaps. Michelle said it was to remove any musty smell that the books may have, but just think it was her extra kindness to add even more of a special personal touch to this most thoughtful of gifts.

If you don't know of Michele and her wonderful company Funky Chunks Soap Company, you certainly should.  Her soap scents are the best I've ever smelled, and they lather like crazy!  If you like to lavish yourself if luxury, and let the sweet and sensual aromas overtake your senses, check out Michele's soaps.

Now that we've lathered and washed, let's get cooking!

This Old-Fashioned Grated Sweet Potato Pudding is the first recipe I've chosen to blog about in my new "Vintage Series" of recipes.  I took this from one of the books Michele sent me called "Everyday Foods,"  which I found on page 518.

The recipe sounded simple, unusual, along with being quick and easy to make, and with a good combination of fall flavors.  I thought would be a perfect choice for me to make on a lazy autumn Sunday afternoon.

You'll notice from the listed ingredients (at the top of this post) the additional items I've added to the original recipe for Old-Fashioned Grated Sweet Potato Pudding (ground cinnamon, nutmeg, brown sugar, and vanilla extract), and I've omitted the milk entirely (in the video version it was strictly by accident) to make this recipe my own.

I must admit, Old-Fashioned Grated Sweet Potato Pudding isn't the most attractive recipe for my first time out of the vintage gate, but the smell was pretty intoxicating as it was baking and caramelizing in the oven.

The reviews for Old Fashioned Grated Sweet Potato Pudding recipe were mixed.  Below are some pictures of my son Adam doing me a favor and giving it a taste. The cookbook suggests serving the pudding with whipped cream or lemon sauce. They both sound good but we opted for frozen vanilla yogurt instead because that's what we had on hand.

We all decided that, while the flavor of Old Fashioned Grated Sweet Potato Pudding is pleasant, much like a pumpkin or sweet potato pie, the texture and overall eye appeal left something to be desired.

The frozen vanilla yogurt helped... A LOT, so don't forget to add some frozen yogurt or ice cream to the pudding before serving. You'll be glad you did.

Below is the printable recipe card along with the nutritional information for today's Old-Fashioned Grated Sweet Potato Pudding.

If you've enjoyed this recipe, I'd appreciate if you'd take a moment to give this recipe some feedback by way of stars near the comment section at the end of this post, OR in the recipe card feature itself. Thanks 🙂 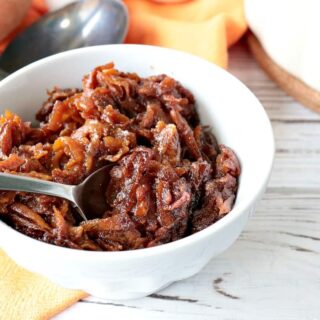 I sincerely hope you've enjoyed this recipe for Old-Fashioned Grated Sweet Potato Pudding as much as I've enjoyed bringing it to you!