If you're a fan of eating coconut ice cream then this no-churn easy Toasted Coconut Pecan Ice Cream will send chills up your spine. In a good way. of course. 🙂

This easy coconut ice cream is by far the tastiest ice cream I've ever made, and it only takes six ingredients! Since I'm a major coconut and pecan lover that probably had a lot to do with it! That, and the fact that it's super simple to make and requires no noisy ice cream maker.

This was my second attempt at making this ice cream flavor. For my first attempt, I had hoped to cut a few of the fat calories, so I tried using half and half instead of using heavy whipping cream. Not wise. Instead of the half and half whipping into stiff and fluffy peaks, it turned into a bubbly, watery mess. Lesson learned. Half and half doesn't have the stability, or fat content, for whipping into the cream. I really should have known better. But, lucky for you, my mistake is your win. So do as I say, and not as I did.

When I made this easy coconut ice cream, I served it over these incredibly rich and decadent White Chocolate Chip Fudge Brownies (recipe coming soon). We were hosting a small backyard gathering so, fortunately, most everything was gobbled up, and there weren't too many leftovers to call my name and tempt me in the days following. This girls' willpower is only so strong. LOL 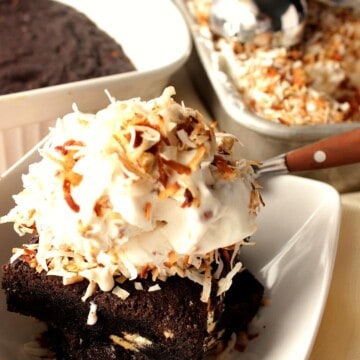 This recipe only works with heavy cream. Don't skimp and use half and half as it won't whip to a creamy thickness and it will be watery.