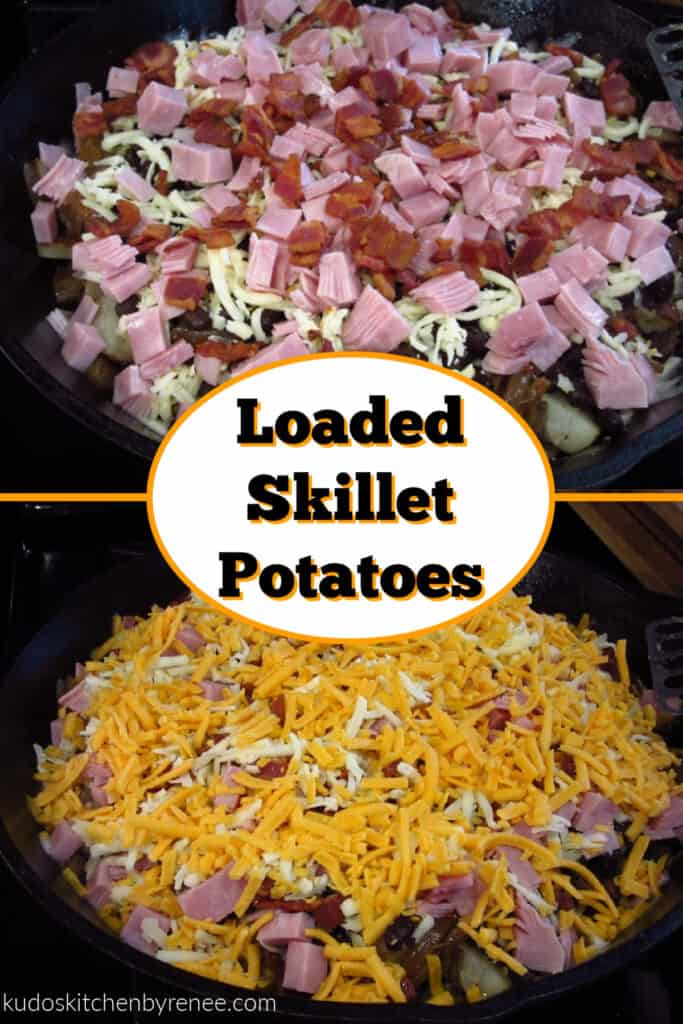 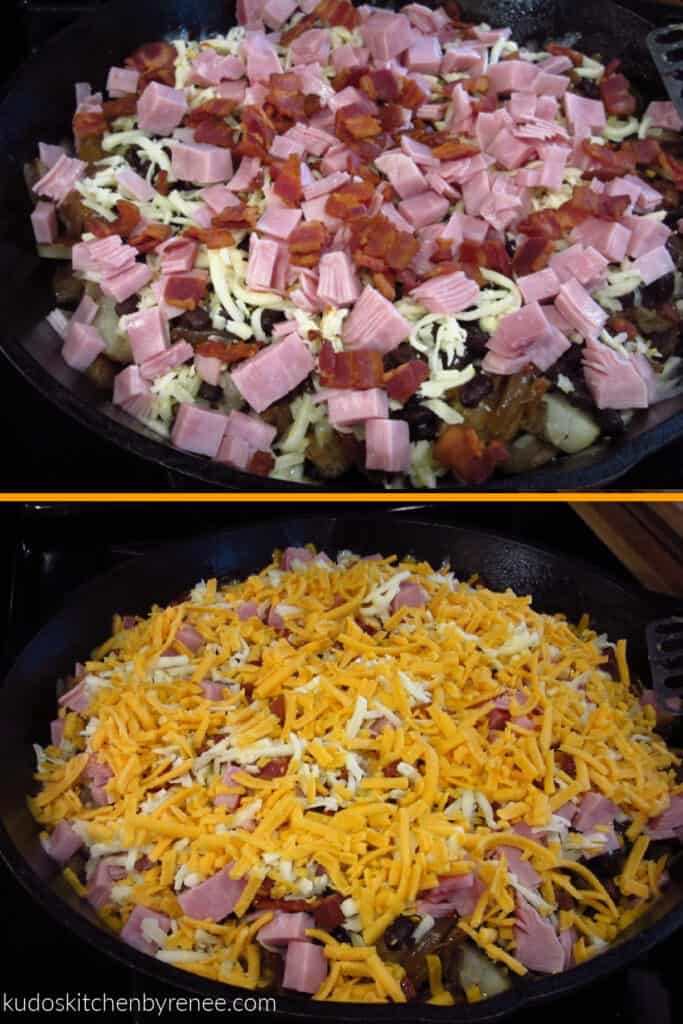 Loaded Skillet Potatoes will work as a main course or side dish. You decide. No matter how you choose to serve them, you simply can't go wrong!

This delicious dish is a great way of cleaning out the fridge and then loading up whatever you have left onto your skillet potatoes.

**Please Note - The printable recipe card with detailed instructions, complete ingredient measurements, and nutritional information for making loaded potatoes in a skillet is available at the end of this post. OR you can hit the "jump to recipe" button (found above) to be taken directly to the recipe.

**Note – The following lists of ingredients plus kitchen tools and equipment contain affiliate links (highlighted in blue) for your consideration and shopping convenience. #CommissionsEarned

I had a lot of leftover russet potatoes on hand after I'd over-prepared my Baked Potato Party Board.

This dish seemed like a natural progression for using a lot of the leftovers and turning them into something completely delicious yet different!

Can this dish be made vegetarian?

By omitting the bacon and ham, you'll have a completely vegetarian dish.

Can other types of potatoes be used in this recipe?

I used russets because I had them already in the fridge.

I find that pre-cooked russet potatoes fry up the best with crispy brown edges in a cast-iron skillet.

However, if you have another type of potato on hand, feel free to use it instead.

Yukon gold or red potatoes (known as waxy potatoes) will also work in this dish, plus they won't need to be pre-cooked.

Also, they'll hold their shape better while cooking due to their starch content.

You get the idea…use your imagination!

How will you top YOUR loaded skillet potatoes?

How to caramelize onions?

Slice 2 or 3 large onions. Add them to a skillet with a little olive oil, butter, salt, and pepper. Cook them over medium heat, stirring only occasionally for approximately 20-25 minutes.

What is the best cheese for melting?

Honestly, if you pre-shred your own cheese from the block, you'll have a far better cheese for melting than the pre-shredded cheeses you can buy at the grocery store.

The reason is that the pre-shredded cheeses in the market are coated with an anti-caking agent to keep the shreds separate in the bag, so they don't all clump together into one single mass.

Why is a cast-iron skillet best for making loaded skillet potatoes?

There are so many reasons why a cast-iron skillet is superior for making this dish, and so many others.

First, a cast-iron skillet heats up evenly with no "hot-spot" areas to deal with.

Second, the browning capabilities of a cast-iron pan far outweigh any other skillets you can use.

Third, they can go into the hottest oven you can throw it into, and you'll never have to blink an eye.

All that said, an important thing to note is that the handle of a cast-iron skillet will get screaming hot!!

It's always best practice to put an oven mitt, kitchen towel, or silicone handle (meant for cast iron skillets) over the handle while cooking to prevent burning yourself!

How to properly season a cast-iron skillet:

Busting some myths about cast-iron cooking from America's Test Kitchen.

The step-by-step photo instructions of how to make loaded skillet potatoes:

Why not give traditional mashed potatoes a little update? Pimento Cheese Mashed Potatoes are easy to make and taste amazing!!

*Roasted Baby Potatoes with Garlic and Herbs (not shown)

These roasted baby potatoes are creamy in the center and golden brown and crispy on the outside. Pair all that deliciousness with a dipping sauce made of mustard, horseradish, and mayonnaise, and you have the perfect side dish or even a fun and unusual party appetizer!! YUM!!

*Chicken Pot Potatoes (shown below and in the featured video)

What do you get when you combine a baked potato with all the comfort and goodness of a chicken pot pie, but without all the work? Chicken Pot Pie Potatoes, that's what!

Crowd-Pleasing Dijon Potato Salad will be the first thing to disappear from the picnic table this summer.

*Loaded Skillet Potatoes (shown below) THIS IS THE PLACE!!

Below is the printable recipe card, along with the exact ingredient measurements and nutritional information for making today's loaded skillet potatoes.

If you've made this recipe or are excited to make this recipe, I'd appreciate it if you'd take a moment to leave it a star rating in the recipe card, along with a comment if you're so inclined. Thank you. 🙂 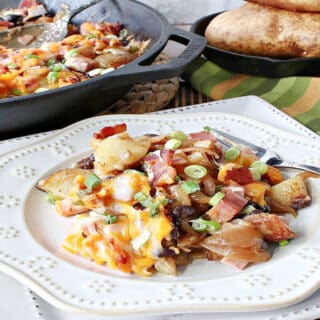 I sincerely hope you've enjoyed today's delicious potato recipe as much as I've enjoyed bringing it to you!