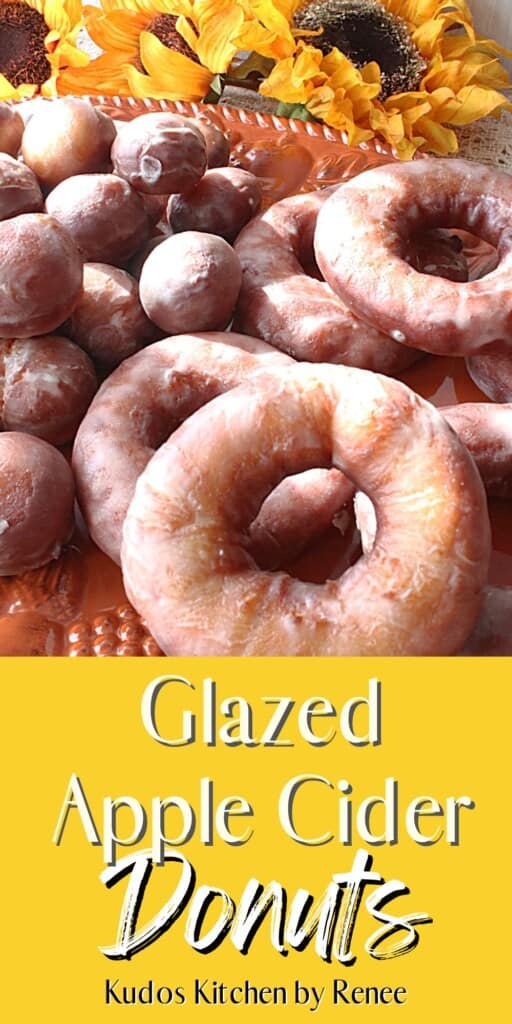 Homemade Glazed Apple Cider Donuts are every bit as good as what you get at an apple orchard or bakery, except that you make them fresh at home!

I originally shared this recipe in 2012. I've recently updated this post with additional information, including a recipe card (complete with nutritional information), new photos and new process shots of how these apple cider yeast donuts are made. However, the recipe itself has remained unchanged.

Yeast donuts are great any time of the year, but apple cider donuts are particularly delicious in the fall.

These glazed donuts is relatively easy to make with a good portion of the time involved is actually hands-off proofing time that won't require anything from you except patience.

The exact measurements, including a feature using Instacart to shop the recipe can be found in the printable recipe card.

Heat apple cider and butter together in a microwave safe bowl to 120-130 degrees on an instant read thermometer.

Note- If the liquid gets past 130 degrees, allow it to cool so it won't kill the yeast.

Add the warm apple cider and butter to the flour mixture.

Add the additional flour to the batter along with three egg yolks.

Stir well, or knead with the dough hook using a stand mixer, until the mixture comes together in a soft dough.

Turn the dough out onto a lightly floured surface and knead until smooth and elastic (process not shown). This will take about 3-5 minutes. Add the dough into a oiled bowl and cover with plastic wrap.

Allow the dough to rise in a warm, draft-free place for about 90 minutes until doubled in bluk.

Uncover, and deflate the dough (process not shown). Divide the dough in half and pat (or roll) the dough out into ½" thickness. Cut the donuts using a 3" round cutter along with a 1" round cutter.

Place the donuts and donut holes onto a parchment lined baking sheet that has been lightly dusted with flour.

Allow the donuts to rest and rise again until puffed (approximately 1 hour).

Heat frying oil (I used canola) in a large, high sided skillet to 350 degrees Fahrenheit on an instant read thermometer.

Carefully lower the donuts into the hot oil using a large slotted spoon or spider.

Allow the donuts to fry, turning occasionally, until golden brown (approximately 45 seconds per side). Note - do NOT leave the donuts unattended while frying. Carefully remove the donuts from the hot oil using the slotted spoon or spider.

Place the fried donuts on a wire rack to cool completely while making the glaze.

Dip the donuts into the glaze and turn them over to coat all sides with the glaze.

Move the glazed donuts to a wire rack to dry completely before serving.

🔑The key to healthier donut frying

If you think frying donuts in hot oil adds a ton of extra calories, you may want to think again.

As long as the oil stays at a consistent temperature of 350 degrees Fahrenheit (an instant-read thermometer is critical for keeping the oil at the proper temp), as soon as the donuts hit the hot oil, they form a light crust on the outside that prevents the oil from soaking into the dough itself.

However, if your oil isn't hot enough, the dough will sit in the oil and soak it in, which is never a good thing and will add a bunch of unwanted calories.

⚠️What is the best oil for frying

An oil that has a very high smoke point is always the best choice for frying. Usually the lighter in color, the higher the smoke point.

For additional information regarding the best oil for frying check out this article from Bonappetite.

As a special surprise for one of my dearest friends who was celebrating a big milestone birthday, I decided to make her something I absolutely knew she would love...Apple Cider Donuts!

And not just any donuts, mind you...GLAZED APPLE CIDER DONUTS!

📷The original photos from 2012

⏲️What is the best way to proof yeast dough?

I like to set my oven to the lowest temperature it can go (mine is 170 degrees Fahrenheit) for 15-20 minutes while I prepare the dough. Once the oven is warm that's where I do all my proofing (resting time).

I also like to cover the dough with plastic wrap during proof times to keep the moisture inside the dough.

If you're concerned with the dough sticking to the plastic wrap, then by spraying a light mist of baking spray on the plastic wrap is a good solution to that potential problem.

🍩How many yeast donuts will this recipe make

As written this recipe will make approximately 12 standard size donuts.

However, should you choose to make all donut holes instead of donuts, you'll get a lot more bang for your donut buck.

🧊Can these yeast donuts be frozen after frying

Yes! You can use freezer zip top bags and make sure to squeeze all the air out of the bags before freezing.

Glazed yeast donuts can kept in the freezer for up to 2 months.

Thaw them at room temperature before serving.

Once the oil is completely cool, you can use a funnel to carefully funnel the frying oil back into its original container. Preferably one that is specifically used for frying.

Mark the outside of the container with either "sweet frying oil" or "savory frying oil" so you'll not make the mistake of using the sweet frying oil to fry something savory or visa versa. There is nothing worse than frying donuts in oil that was also used to fry fish. Just imagine. No. Don't. 😉

📅How to store used frying oil and for how long?

I store mine in a cool area of my home away from direct sunlight.

The amount of time you can reuse frying oil is usually between 3-4 times. After that the oil will most likely have a noticeable change in color and will undoubtedly collect a lot of bits and pieces that have settled to the bottom of the container.

It is at that point that you want to responsibly dispose of the used oil and start again when fresh when you're ready to fry, fry again.

How long will these donuts stay fresh?

Store them in a closed brown paper bag on the counter at room temperature for up to two days. It's always best to eat these glazed apple cider donuts within the first or second day of making. Of course, that shouldn't be a problem.

Can these donuts be rolled in cinnamon sugar and not glazed?

They can, but you'll need to do so immediately after removing them from the hot oil so the cinnamon and sugar sticks to the outside of the donuts.

Can the glaze be omitted altogether?

Yes, of course, but the apple cider glaze really intensifies the delicious flavor of the donuts so I urge you to glaze away.

Is a stand mixer imperative for making these donuts?

Nope. You can easily use a large bowl, wooden spoon, and elbow grease to knead the dough to the right consistency. It's definitely doable and some people would say, a lot more fun!

🔗Additional fried food treats I don't want you to miss:

Part of the fun of eating Fried Rosette Snowflake Cookies is the dusting of confectioners sugar that will inevitably snow down the front of your shirt as you crunch into these crispy little holiday treats. There's no way around it, so just give in and let it snow!

Even if you're not a huge mushroom fan, I'll bet you're going to flip over these Beer Battered Fried Mushrooms!

Chicken and waffles get a picnic-ready upgrade with this recipe for Waffle Batter Fried Chicken! Now you can pack up this classic treat, and easily take it wherever you want to go.

In celebration of Mardi Gras and dressed in green, gold, and purple sanding sugar these pillowy soft and perfectly Fried Homemade Beignets are ready to party! 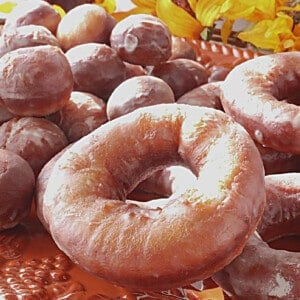 To make the dough:

To glaze the donuts: