With only a little extra effort, this festive Coconut Banana Custard Pie with a Holly Berry Crust will be the star of any holiday dessert buffet. And, it tastes just as good as it looks!

I've been having such fun the past few months playing with pies and crusts that I just can't seem to stop myself.

Not that I actually want to, because they've seemed to have struck a chord with people, and I couldn't be more thrilled.

I have several more ideas in mind for decorated pies and crusts, so I hope you'll stay tuned. But first up is this one for Coconut Banana Custard Pie with a holly berry crust.

If you're wondering about the other pies and crusts I've been having fun with, please allow me to take a moment to show you the ones I shared during the month of November.

It all started with this one for Turkey Crust Pumpkin Pie, which has been pinned a remarkable one hundred and ninety- eight thousand times, and counting! Oh, my gracious!!

And this one for a Colorful Autumn Leaves Crusted Apple Pie uses the same gel food coloring technique that I'm sharing again today.

This pie and design have been pinned over two thousand times itself (and counting), which is still quite respectable if you ask me!

I've been having such fun bringing you these designs that my mind just won't turn off when it comes to sharing unique new ideas, which are easy for you to recreate at home.

Just like today's recipe (and instructions) for Coconut Banana Custard Pie with a Holly Berry Crust.

From there I made two simple templates for the leaves using a piece of cardboard, and for the berries, I used a Wilton cake and cookie decorating tip #12 (top and bottom) to make the larger and smaller circles.

I'll make sure to list the gel food coloring, and the Wilton decorating tip in the affiliate links so you can purchase them if you need to, for making this pie.

The following Amazon.com items are some suggested products I've chosen that will aid you in the making (and serving) of this Coconut Banana Custard Pie with Holly Berry Crust recipe if needed. 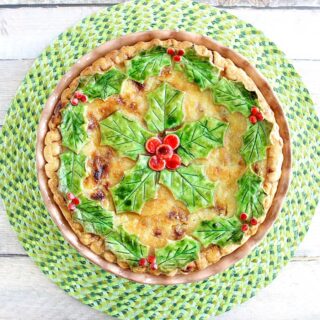 Kudos Kitchen by Renée ~ Where food, art, and fun collide each and every day!

More recipes you may enjoy