The health benefits of Beef Bone Broth are enormous, and making it at home in the slow cooker couldn't be easier.

Over the last several months, I've been hearing more and more about the benefits of drinking bone broth and how good it is for your skin and gut. Since I'm all about trying to slow the aging process and be as healthy as possible in the process, I decided to make my own bone broth using the slow cooker and share the recipe with you! It's delicious, nutritious, and costs only pennies per serving.

Bone broth is rich in vitamins, minerals, and amino acids that support a healthy immune system. Since it's made directly from bones (as any good homemade soup stock or broth is), it's packed full of healthy collagen that aids in plumping aging skin, and also helps heal your gut lining which reduces intestinal inflammation. Bone broth is even believed to help reduce the appearance of cellulite, and if that alone isn't enough reason to make and drink it, I don't know what is!

Beef bones can be purchased from any butcher or grocery store right in the meat department. If they're not out in the meat case, just ask the butcher for a few beef femur bones. They'll most likely be cut into larger 6" - 7" bones, or the smaller ones like I purchased which are 3" - 4" in length. I used four smaller bones to make my broth and made sure to roast them first, before making the broth, to bring out even more beefy flavor.

Place the beef bones on a baking sheet and place them in a preheated 425-degree oven for 45-50 minutes. This step can be done in advance and then refrigerate the bones until you're ready to make the broth. To make the broth, place the roasted bones in a 6-quart slow cooker.

Cover and cook on high for 4 hours, or low for 6-8 hours. Carefully remove the bones from the cooker.

Use a large slotted spoon to remove all the aromatics, leaving only the broth behind. Use a ladle to scoop out the broth and strain it into a large 4- quart container. Serve hot now, or allow the broth to cool before refrigeration. Microwave before drinking if refrigerated. 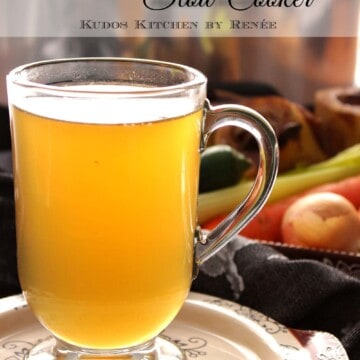 I like to add a splash or two of hot sauce to mine before drinking.
If you like a hotter (spicier) broth, leave the seeds in the jalapeno instead of removing.
If refrigerated, microwave the broth before serving.
Bone broth will keep in the refrigerator for up to 7 days.
Tried this recipe?Let us know how it was!

Ahhhhh. I feel better already, and I can almost feel my cellulite melting away. Ha! Ha! Ha!... If only!

Kudos Kitchen by Renée ~ Where food, art, and fun collide each and every day!