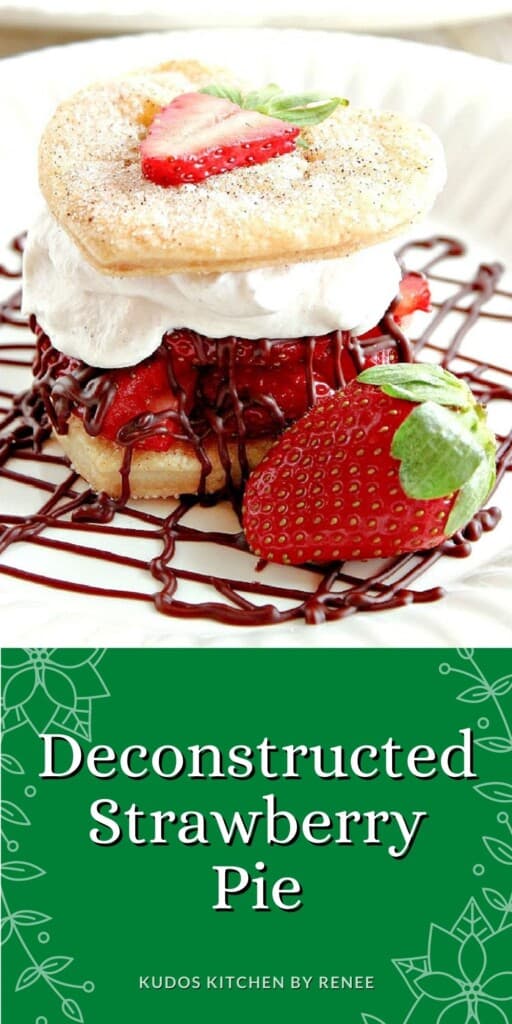 Deconstructed Strawberry Pie with cinnamon whipped cream and chocolate ganache may look difficult to make, but they only take moments with the help of store-bought pie crust.

Two cinnamon-sugar crust pie hearts sandwich the tastiest of strawberry pie ingredients. You're going to fall in love with this attractive showstopping dessert!

Sometimes ideas for recipes keep me awake at night.

If I didn't think the sound of my stand mixer whipping up cinnamon whipped cream would bother my family in the middle of the night, I probably would have been baking and assembling these charming deconstructed pies at 2:00 in the morning.

I came up with the idea for making Deconstructed Strawberry Pie when the call went out for a monthly recipe and photo competition.

Naturally, February's theme is Valentine's Day and the three ingredients that must be used in this month's submission are strawberries, chocolate, and cinnamon.

What is a deconstructed pie?

It's all the components of a traditional pie, but it's put together in a different and unexpected way.

The idea for crust-pie is simple.

Sprinkle the scraps of dough that you have leftover when rolling out pie crust with cinnamon and sugar and bake them until crispy.

Those flaky little crust pie morsels are almost better than the pie themselves.

This recipe takes the idea of crust-pie and turns it into a fun and whimsical deconstructed strawberry pie that is perfect for Valentine's day.

How to make a deconstructed strawberry pie:

Delight your family and friends with this Old-Fashioned Strawberry Rhubarb Bundt Cake. It’s so flavorful and tender that you’ll wish rhubarb was in season all year long!

With only one bowl and a few simple ingredients, you can have this Strawberry Banana Bread with Almond’s baking in the oven in no time flat!

Bring this Strawberry Crostata to the table and any occasion has been instantly upgraded to something truly special…and delicious!

*Deconstructed Strawberry Pie (shown below) THIS IS THE PLACE!! 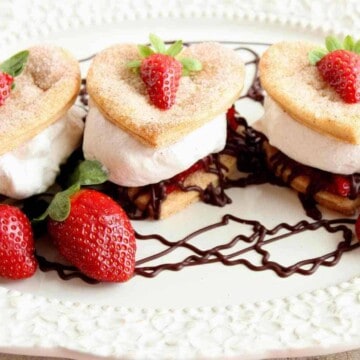 For the pie crust and the berries:

For the cinnamon whipped cream:

For the chocolate ganache:

To make the pie crust hearts:

To make the cinnamon whipped cream:

To make the chocolate ganache:

To assemble the deconstructed strawberry pies:

I sincerely hope you've enjoyed today's special strawberry deconstructed pie dessert recipe as much as I've enjoyed bringing it to you!