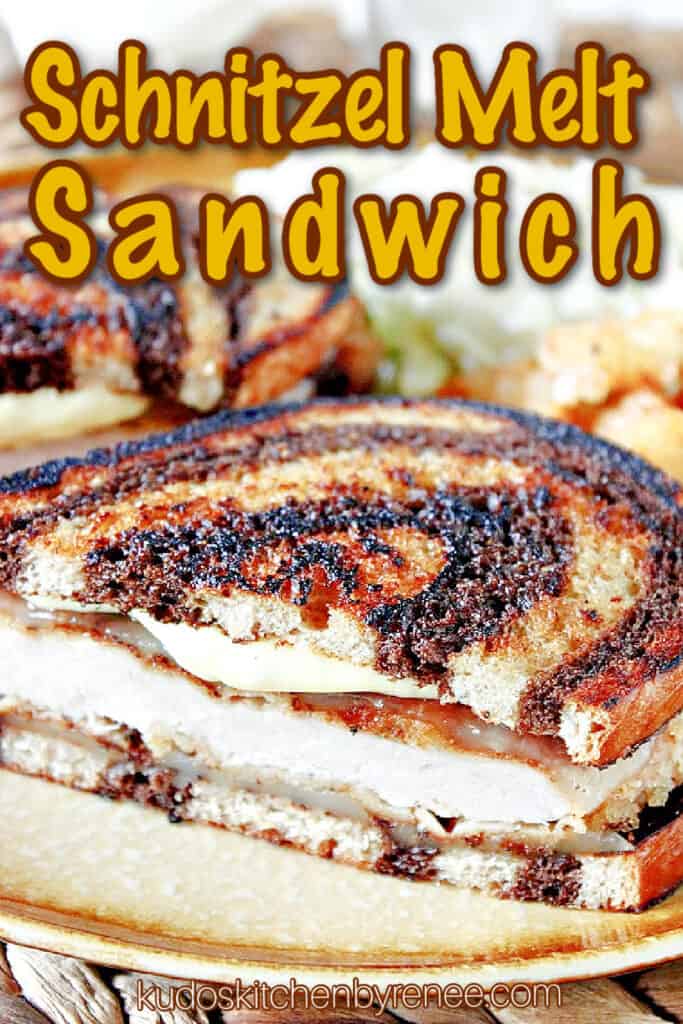 A Schnitzel Melt Sandwich is a lightly breaded pork schnitzel that is pan-fried until crisp, added to swirled rye bread, and topped with melted cheese!

**Please Note - The printable recipe card with detailed instructions, complete ingredient measurements, and nutritional information for making a Schnitzel Melt Sandwich is available at the end of this post. OR you can hit the "jump to recipe" button (found above) to be taken directly to the recipe.

Can other proteins be used to make schnitzel?

I chose boneless pork chops as my schnitzel protein but feel free to substitute boneless, skinless chicken (breast, thighs, or both), or even boneless veal chops (aka wiener schnitzel).

The method of making the schnitzel is exactly the same no matter what protein you choose, so make it your own, and make it often.

I do believe you're going to love this sandwich!

What type of cheese is best for a German schnitzel sandwich?

I chose to add Swiss cheese to my pork schnitzel because it's one of my favorite cheeses, but feel free to add whatever cheese is your favorite.

The secret's in the sauce:

I topped these sandwiches with some super easy-to-make honey, mustard mayonnaise.

I think this sauce would also be good with a light touch of beer (I just thought of that now), but that's strictly the adult version, and NOT for the kiddos.

Naturally, that would be kicking up the Oktoberfest theme a notch or two, and I'm certainly not opposed to that!

How to slice boneless pork chops to make schnitzel:

How to make Schnitzel Melt Sandwiches:

My love of German flavors and ingredients was the original inspiration for this dish of hearty German meatballs. It’s a delicious comfort-food recipe, with a German twist.

This copycat German knockwurst sandwich is my version of a terrific sausage sandwich I’d had while on vacation in Northern Wisconsin.

Buttered German egg dumplings (spaetzle) are layered in a casserole dish along with shredded Gruyere cheese and crispy, crunchy onions to bring you this delicious recipe for German Spaetzle Casserole.

*German Schnitzel Melt Sandwich (shown below) THIS IS THE PLACE!!

Below is the printable recipe card along with the exact ingredient measurements and nutritional information for making today's Schnitzel Melt Sandwich.

I sincerely hope you've enjoyed this German-inspired breaded pork sandwich as much as I've enjoyed bringing it to you.