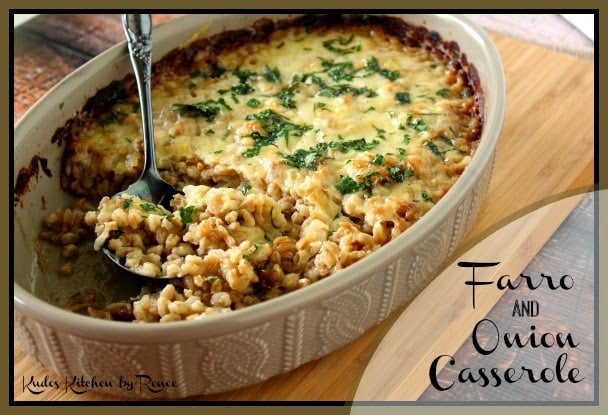 I’m going to get this admission out of the way, right out of the gate. I got this recipe for Farro and Onion Casserole from Food Network Magazine, the November 2013 edition, and I followed it exactly to the letter as far as which ingredients I used. The only thing I did switch up were the quantities. Oh, and I changed the name. I don’t claim that this recipe is mine (I only do that when they are), and I’m sharing it with you here on my blog because if you’re not a subscriber to Food Network Magazine, or don’t purchase it at the store you probably missed seeing it, and you really need to know about this recipe because it’s AHHH-mazing!!! 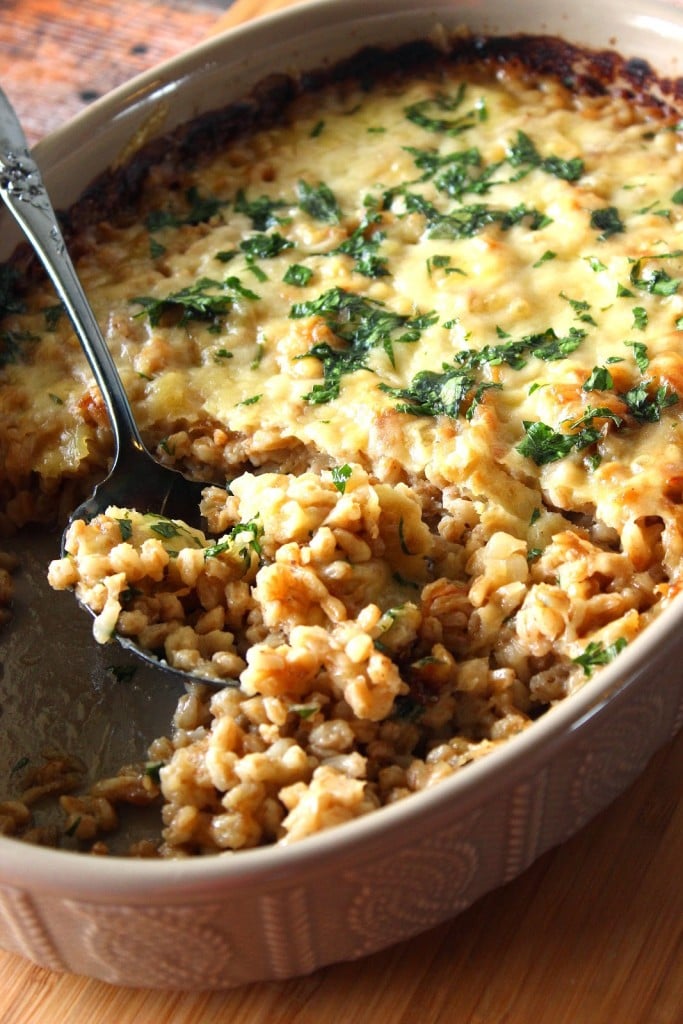 I’ve had farro in my kitchen pantry for months and months with the thought that one day I was actually going to make something delicious with it. Makes sense, right? I’ve also had a stack of old food magazines sitting on my desk bookshelf that I’ve been meaning on going through in order to find new recipes I intend to make and/or play with.

As luck would have it, the other day I finally sat down with my cup of coffee and my handy-dandy scissors and within minutes had found this recipe. I made it within a week of finding it with the farro that has been waiting so patiently in my pantry. Bite after bite had me exclaiming how tasty it was with a fair bit of “ooh’s”, “aah’s”, and “oh mans!”

This Farro and Onion Casserole  is so good that I believe I’ve already slated to be on our Thanksgiving menu this year. Don’t get me wrong, I’m all about traditions, but I’m also all about switching it up from time to time to keep people guessing 🙂 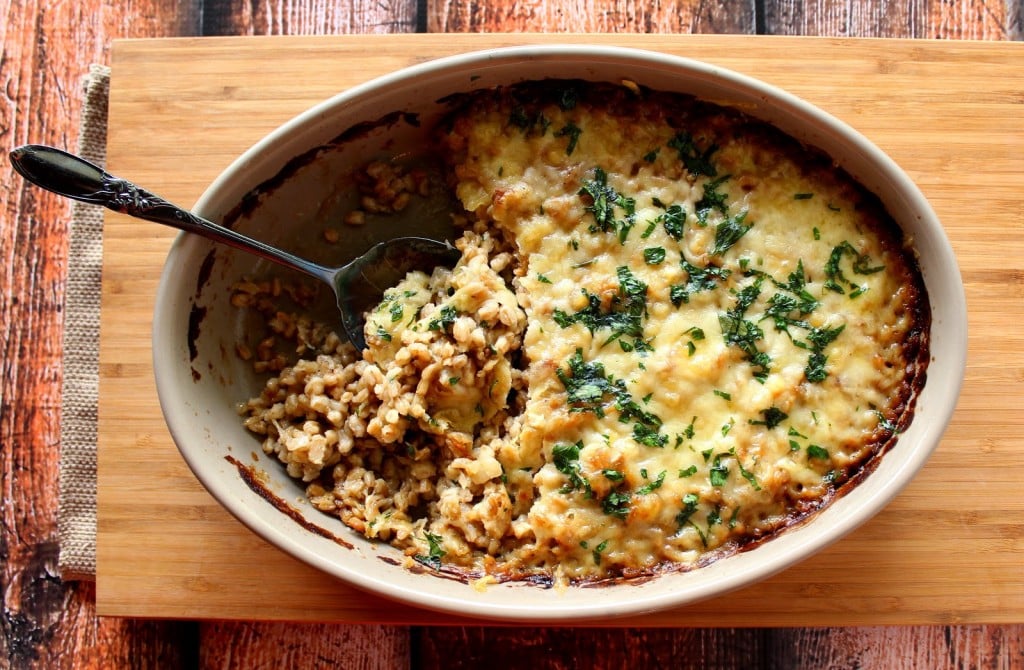 Farro is an ancient wheat grain with a nutty taste and pleasingly chewy texture. It’s earthiness holds up well to strong flavors, like the Gruyere cheese and cognac in this recipe. Think comfort food for the ages 🙂

-Preheat oven to 400 degrees.
-Melt the butter in a large Dutch oven over medium/high heat. Add in the sliced onions and cook, stirring occasionally until the onions are softened but not browned (approximately 5 minutes).
-Stir in the cognac and cook until evaporated. *IMPORTANT – Make sure to remove the pan from the heat before adding the cognac. Once it’s added, you can return it to the flame.
-Add the farro, Worcestershire sauce, salt and pepper. Cook and stir until the farro is completely incorporated coated, 2 minutes.
-Stir in the chicken broth and bay leaves. Add in the Parmesan rind (if using) and stir in the grated Parmesan cheese. Simmer over low heat for approximately 7-10 minutes.
-Remove the rind and the bay leaves. Pour the mixture into a 1 ½ quart casserole dish that has been sprayed with cooking spray.
-Cover with foil and place in a preheated oven for about 40 minutes and the farro is tender and most of the liquid is absorbed.
-Remove from the oven and evenly sprinkle the Gruyere cheese over the top. Return the casserole back to the oven and cook for an additional 10 minutes or until the cheese is melted and bubbly.
-Sprinkle the top with the chopped parsley and serve hot. 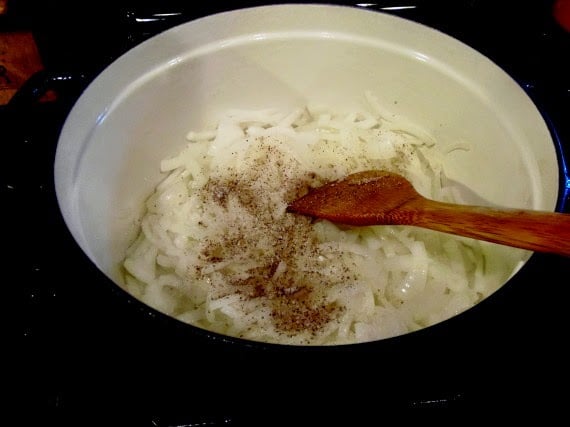 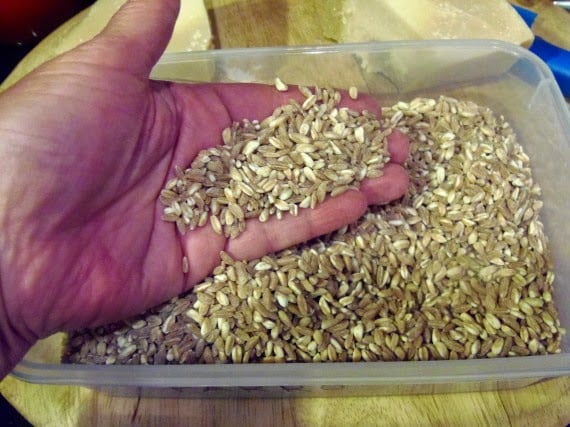 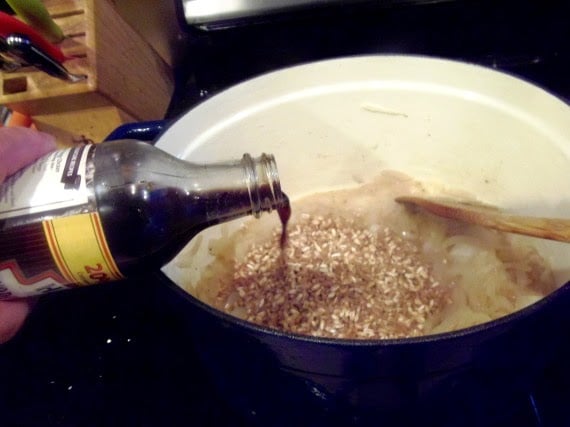 Stir in the chicken broth, bay leaves, Parmesan rind and Parmesan cheese. Simmer for about 10 minutes. 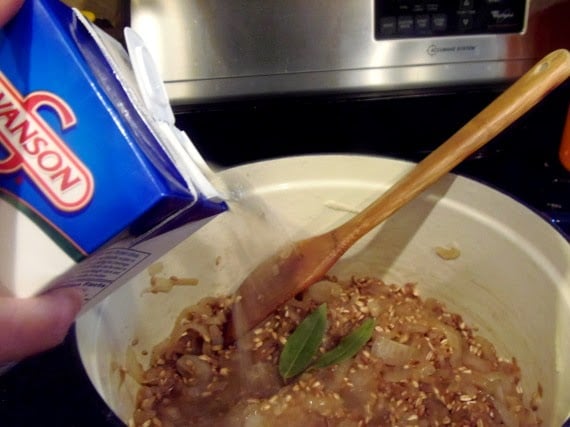 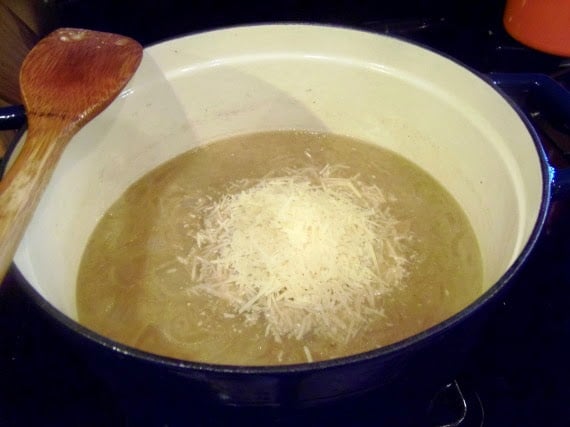 Remove the rind and the bay leaves and pour the mixture into a prepared 1 ½ quart casserole dish. Cover and cook for 40 minutes or until most of the liquid is absorbed and the farro is tender. 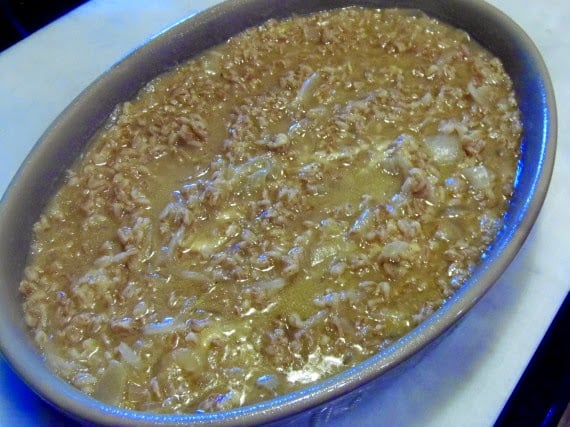 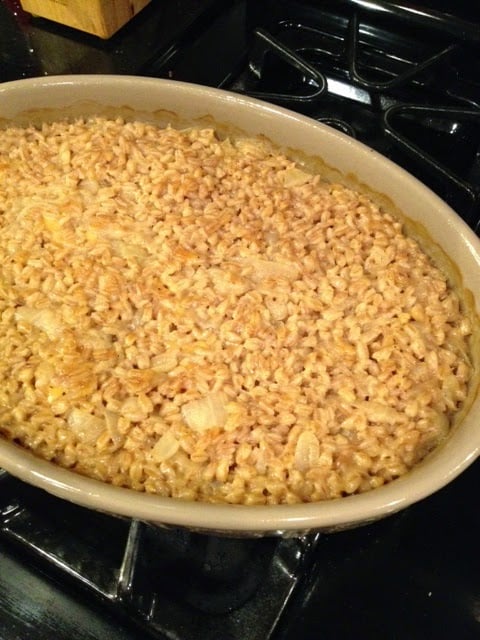 Top the casserole with the grated Gruyere cheese and return to the oven, uncovered, until the cheese is melted and bubbly. Top with the chopped parsley and serve. 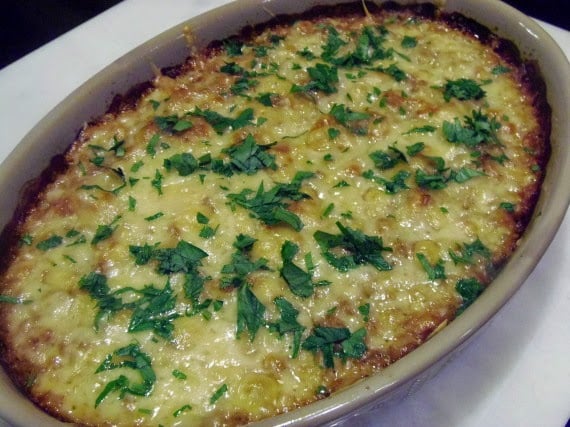 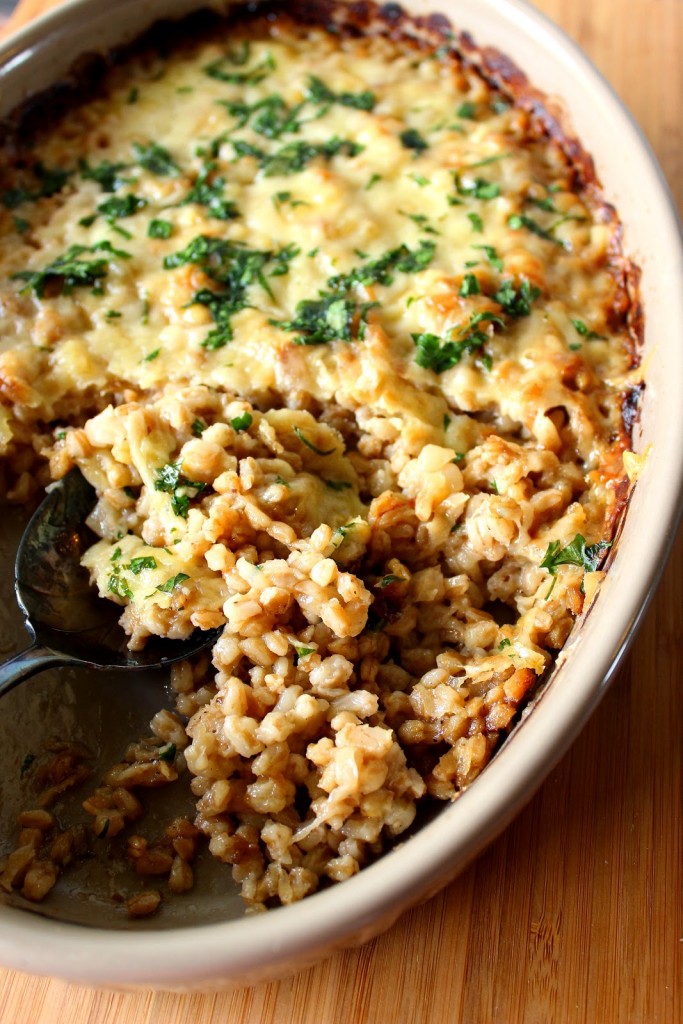 I hope you’ve enjoyed this recipe as much as I’ve enjoyed bringing it to you. It really is one of the best tasting side-dish recipes I’ve made from a magazine in a long time. I know you’ll enjoy it just as much as we did.

I’d like to coordinate this post with this fun Nightmare Before Christmas wine glass set I’ve recently completed for a client. The moral of this story, recipe and wine glass set is: Don’t be “afraid” to try something new. You just never know what good things await once your open your mind, and your heart, to something new!

Oh how i love Gruyere!!! I have to admit I haven't used farro much, but when I've used it I've always been pleased. So happy you posted this one!

I adore farro and can't wait to try this one. It looks scrumptious. Digging the glasses for the client too. Too cute for words. Huge fan of that movie.

I LOVE farro (and cooking with onions, for some odd reason) and rarely if ever see it used this way. I love it and love the flavors. Don't do Thanksgiving, but I can see this being just a great winter lunch or dinner followed by fruit! So glad you passed on the recipe!

This looks positively amazing! Especially with the essence of cognac !

I'd love to cozy up with a plate of this. Vidalia onions are my favorite ever! Except they really bring tears to my eyes.