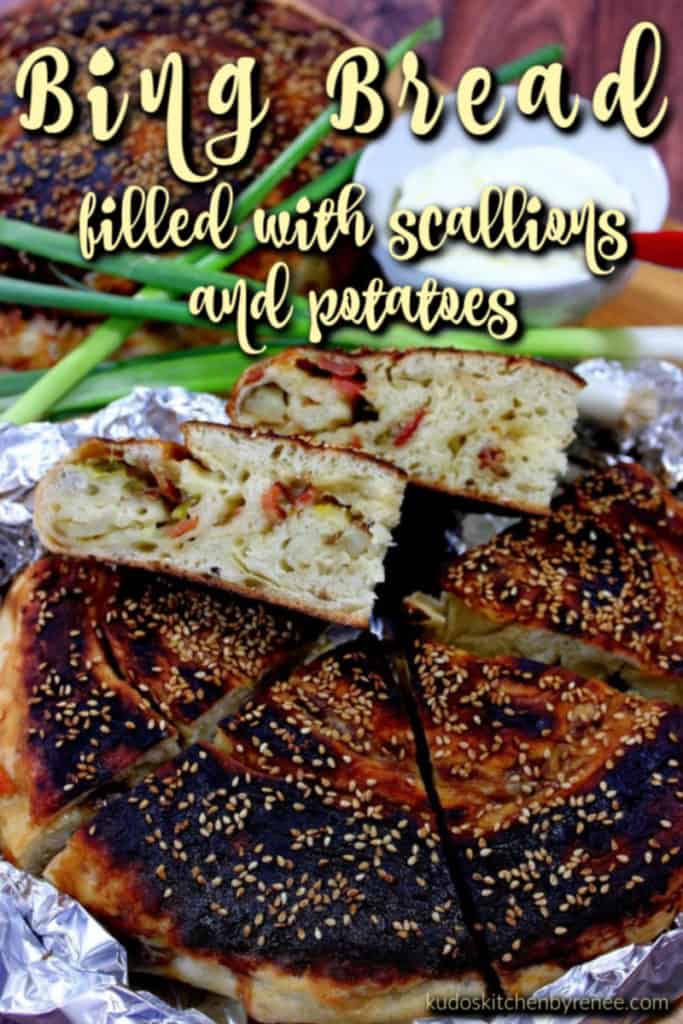 Chinese Bing Bread is a yeasted sweet and savory flatbread that's filled with potato, bacon, green onion, and cheese. Topped with soy sauce and sesame seeds, bing bread is best when grilled in a cast-iron skillet for an amazing outer crust, and finished in the oven.

If you love to bake with yeast and are looking for something out of the ordinary that will thrill and excite your friends and family, then this recipe for Chinese Bing Bread (aka stuffed scallion pancake) is just what you need.

**Please Note - The printable recipe card with detailed instructions, complete ingredient measurements, and nutritional information for making this stuffed scallion pancake is available at the end of this post. OR you can hit the "jump to recipe" button (found above) to be taken directly to the recipe.

What is bing bread?

Also known as a scallion pancake, Chinese Bing Bread (or, Con You Bing) can be filled with whatever fillings you wish to use.

Where this recipe came from:

I originally found this recipe for Chinese Bing Bread in a copy of Bon Appétite magazine (and also on their website). The moment I laid my eyes on this bread (served at the restaurant called Parachute in Chicago) I knew I had to make it.

I've adapted the recipe ever so slightly with the following substitutions: I used Greek yogurt in place of the sour cream for the finishing butter, and I substituted mozzarella cheese for the white cheddar in the filling.

The flavor of this Chinese Bing Bread's is exceptional!

You're going to love the crunch the outside of the bread provides after it's been browned in the skillet, and along with the zip of the scallions, and the creamy roasted potatoes nestled inside. They're unexpected, but oh so perfectly delicious in this Asian flatbread recipe!

The outcome is worth the time and effort!

This recipe takes a bit of time to make and includes several different, but not difficult, steps.

That said, I assure you that it's well worth the time and effort you'll spend making this amazing sweet and savory yeasted flatbread.

In addition, the fact this recipe yields two "loaves" means you can either feed a hungry crowd, or eat one now and put one in the freezer for later. BING!

How long will this savory stuffed scallion pancake take to make from start to finish?

Figure on approximately 2 hours from start to finish. However...

Many aspects of this recipe can be made ahead of time and stored in the refrigerator before assembling if desired.

To save time, you can precook, drain, and crumble the bacon in advance. And you can also roast the potatoes in a day or two ahead and store them in the refrigerator as well until ready to use.

Can bing bread be frozen after cooking?

Wrap the loaf (or slices) well in aluminum foil and freeze for up to two months.

How to make Chinese Bing Bread:

Below is the printable recipe card along with the exact ingredient measurements and nutritional information for making today's Chinese Bing Bread.

I sincerely hope you've enjoyed today's delicious Asian stuffed flatbread recipe for bing bread just as much as I've enjoyed bringing it to you!