What do you get when you cross a delicious and comforting chicken pot pie with a handheld sandwich? Chicken Pot Pie Pockets, that's what! It's a comfort food treat that is as on-the-go as you are! 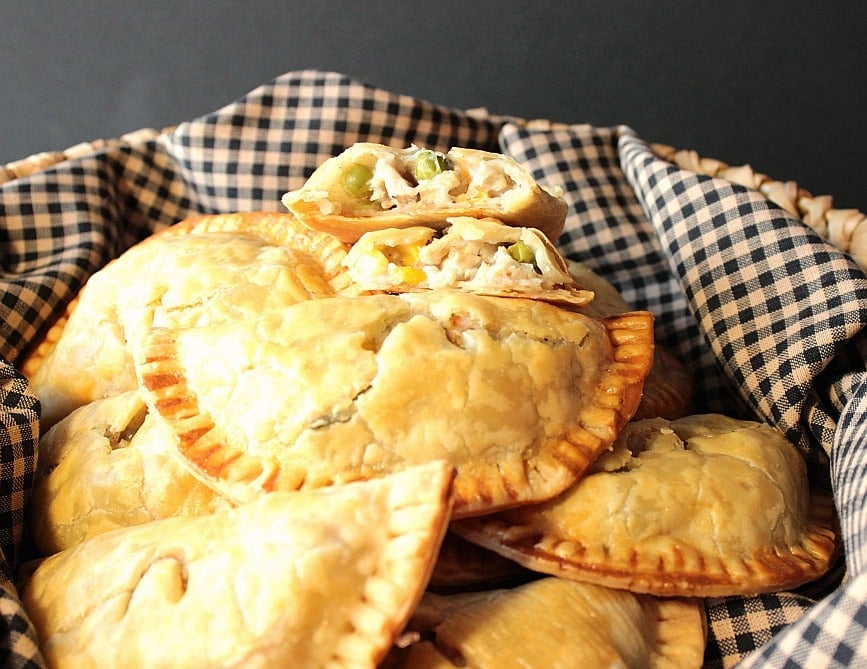 All the flavors you love in a traditional chicken pot pie are neatly folded into these handheld pie crust turnovers. They're family friendly in so many ways, especially with the use of store-bought rotisserie chicken and prepared frozen pie crust. These Chicken Pot Pie Pockets are a snap to make, and a treat to eat! 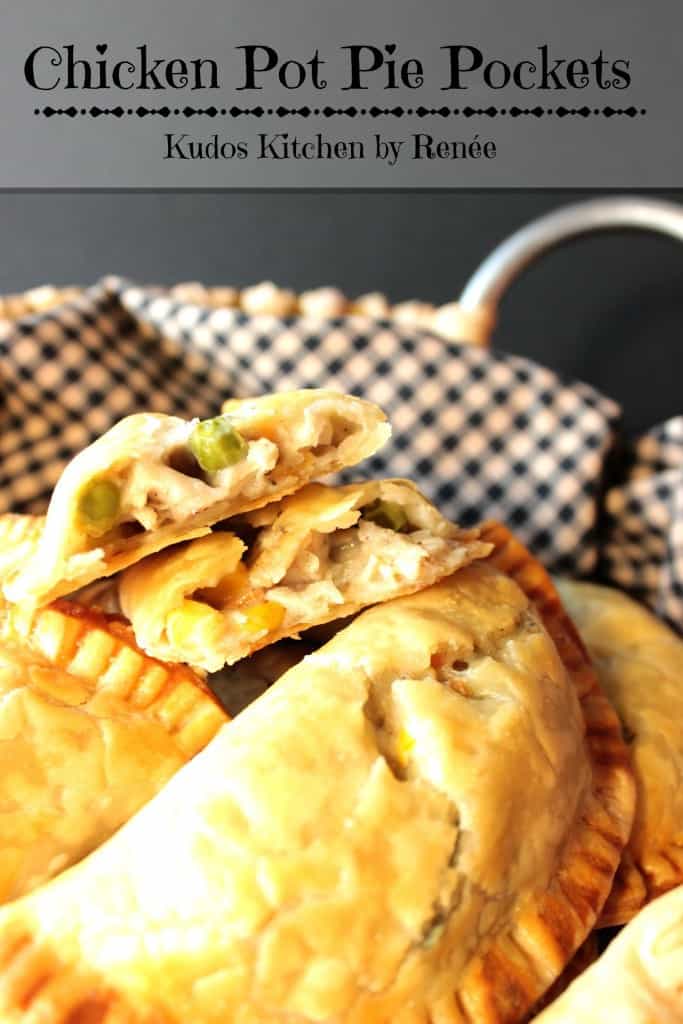 I have a thing about rotisserie chickens lately. It seems that every time I walk into a grocery store, I walk out with one (sometimes even two). I like to add the shredded chicken meat into my lunchtime salads for an added kick of protein. I add the meat into soups and stews when I don't have any leftovers in the fridge, and I also like to give our dogs a special treat by adding their medicines into bits and pieces of the tender white and dark meat. And sometimes (more times than not), just as a treat for myself, I like to stand at the kitchen counter, picking, ripping and chewing with abandon at one of those delicious rotisserie birds (I paint a pretty picture, don't I?). LOL

Since I'm always thinking about new and delicious ways to incorporate this tasty grocery store shortcut into meals and snacks, I came up with these Chicken Pot Pie Pockets, and I'm here to tell you...they're 'da bomb diggity! 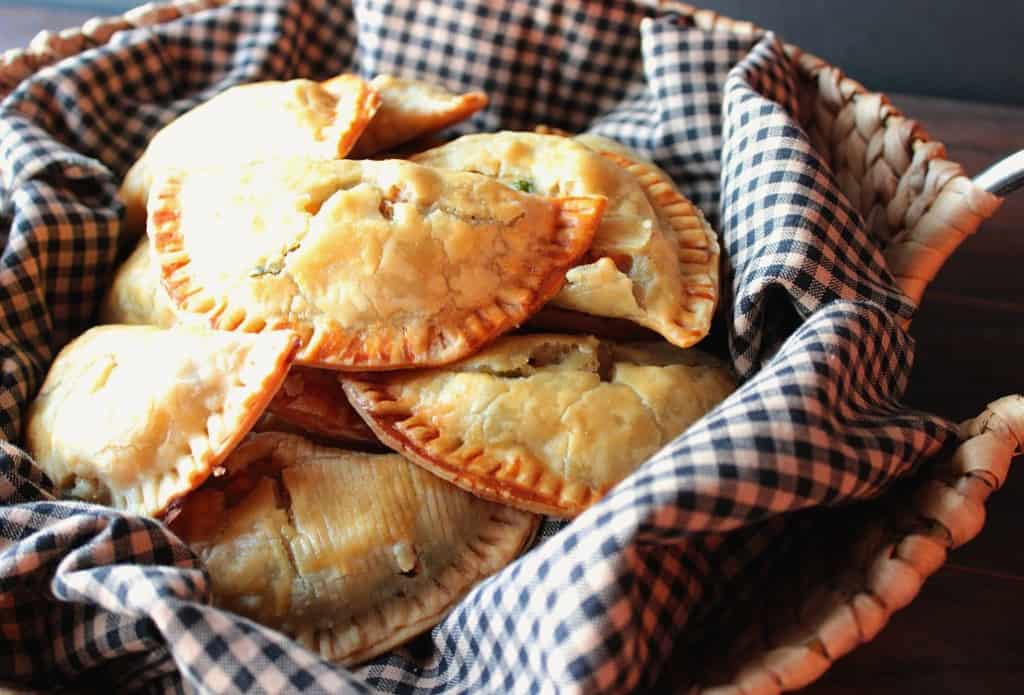 Can these be frozen then baked later?

Making these Chicken Pot Pie Pockets couldn't be easier, and they take only a handful of simple ingredients such as; rotisserie chicken that's been removed from the bone and cut into bite sized pieces, frozen mixed vegetables, store-bought frozen pie crust, butter and flour, chicken broth and poultry seasoning. That's it, and here's how:

Assemble the ingredients, making sure the pie dough and the mixed frozen vegetables have been thawed. In a medium sauce pan, make a roux (thickening paste) by stirring equal parts of butter and flour together to make a paste.

Stir the chicken broth into the roux paste and continue whisking over medium heat until a thickened, chicken gravy forms. Season with salt, pepper, and poultry seasoning. Stir in the thawed, mixed vegetables.

Remove from the heat and stir in the bite sized chicken pieces. Allow to cool. Meanwhile, roll the pie crust out onto a lightly floured surface. Use a small bowl with a circumference of 5" or 6" and using a paring knife, cut around the outside of the bowl. Place approximately 1½ tablespoons of the cooled, chicken pot pie filling onto half of the pie crust circle, making sure to leave an approximate ½" border.

Use your fingertip or a brush to place a small amount of water around the entire edge of the pie crust circle which will help to close the edges of the pie crust so the filling stays inside the pocket once baked. Gently fold the top of the pie crust over the filling and press the edges or the pie crust together to seal. Use a fork to press onto the sealed edges (not shown) for decoration and added insurance that the edges are properly sealed. Transfer the pockets to two baking sheets, and brush the tops of the hand pies with an egg wash before baking.

Use a paring knife to place a few steam vents into the top of each pocket. Bake the pockets in a preheated 350 degree oven for approximately 30-25 minutes, or until the pie crust is golden brown and the filling is slightly starting to bubble out of the steam vents. Remove from the oven and allow to cool slightly. Serve hot or warm.

Tried this recipe?Let us know how it was! 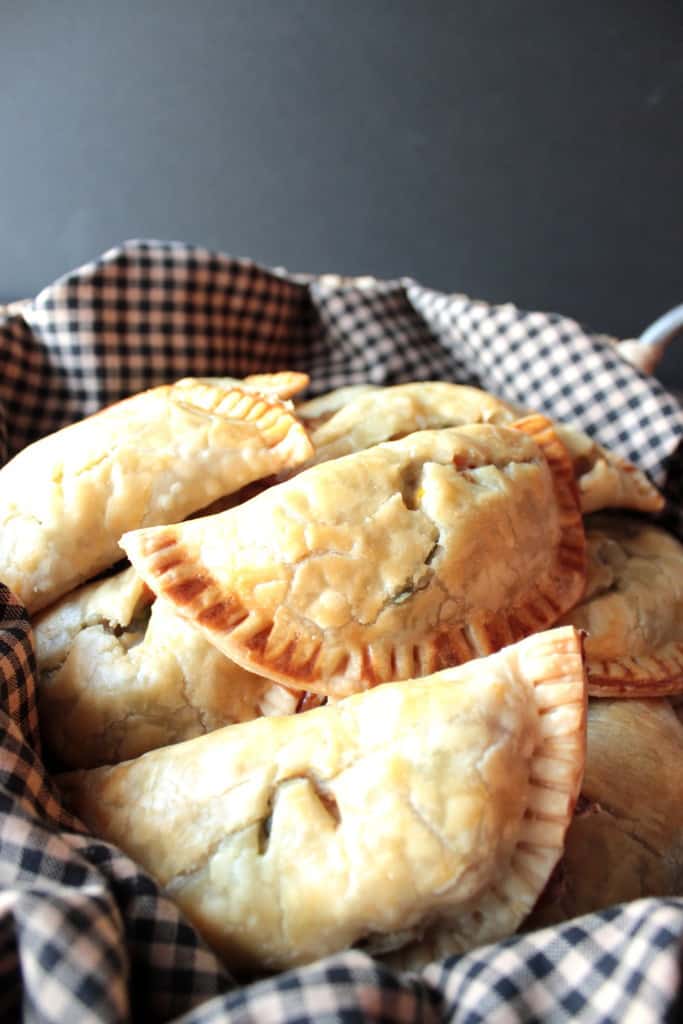 Right about now, comfort food that you can eat on-the-go is something I sure can use. If you've read this far, then I thank you, and I'd like to take a moment to tell you that my postings may be a little sporadic over the next few weeks. You see, my dad has recently been put on hospice care and I'm going to be giving as much time and support as I can to my dad, and mom, as we travel this journey together as a family.

As much as I wish I could be in two places at once, my priority is with my family.  So, as you'd suspect, I won't be able to put in as much time with my blogging, cooking and baking as I had been in the past. I know you understand and I promise that as things get a little more sorted out, I'll try to be posting again on a somewhat regular basis. Thank you all so much for allowing me to come into your homes, and your kitchens. It means the world to me.