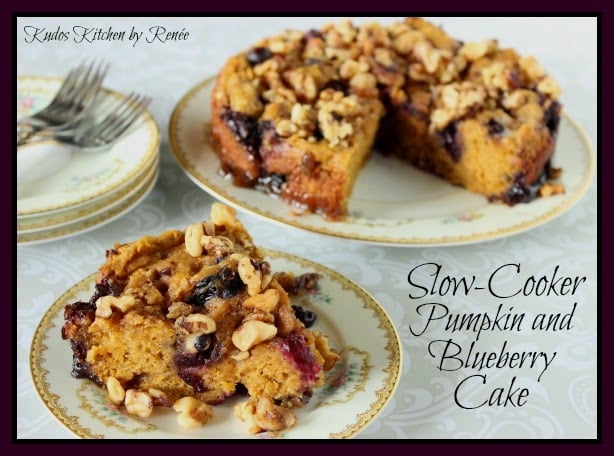 I’ve been trying to use my slow-cooker on a pretty regular basis lately, but until now I’ve never baked a cake. I’m very pleased with how this Pumpkin and Blueberry Cake turned out, even though I kept peeking into the cooker because I was nervous that it would be an epic fail!

Thankfully my first time slow-cooker cake baked all the way through and smelled amazing each and every time I stuck my nose into peek. LOL The next time I bake a cake in the slow-cooker I promise I’ll be more relaxed and won’t peek (but don’t hold me to that).

I’ve determined that the key to baking a cake properly in the slow-cooker is to have a few sheets of paper towels lining the cover that will absorb the condensation that a slow-cooker is famous for. The paper towels absorb the steam wonderfully well, so that it doesn’t drip back onto the cake adding additional liquid to the cake that you just don’t want. Keep this in mind whenever you’re baking in your slow-cooker, and I believe you’ll have wonderful results each and every time! 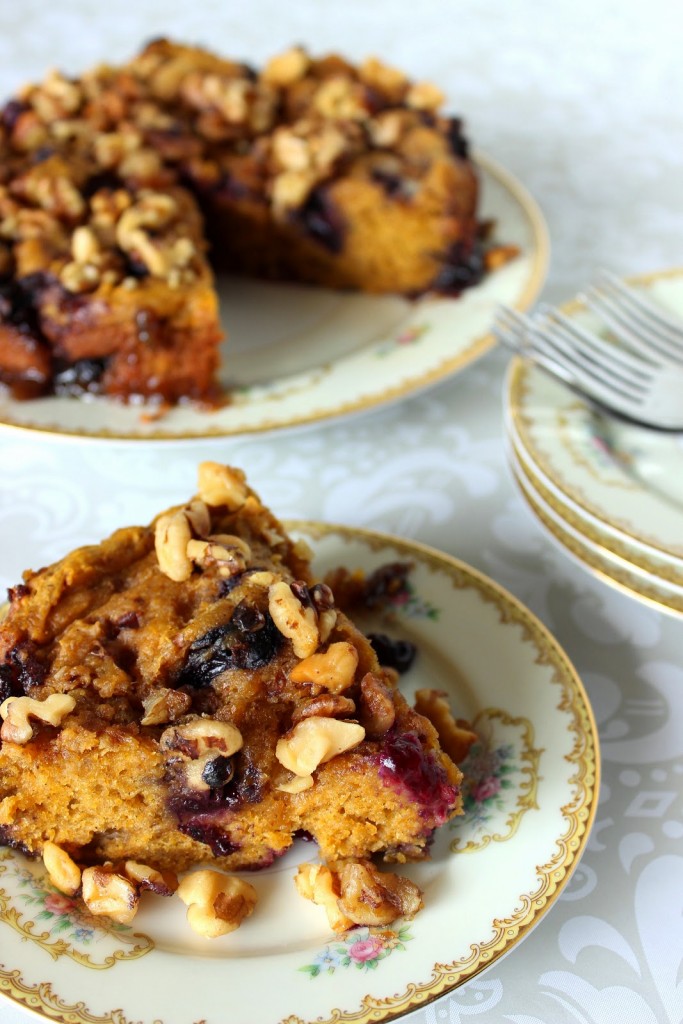 -Spray a slow cooker liberally with baking spray.
-In a medium bowl, whisk together the pumpkin puree, evaporated milk and brown sugar.
-In a large bowl, stir together the flour, salt, cinnamon, cloves and nutmeg.
-Using a pastry blender, cut the cold butter into the flour mixture until it resembles coarse crumbs.
-Stir the pumpkin mixture into the flour/butter mixture until just combined. The batter will be thick.
-Carefully stir in the blueberries, being careful not to break too many of them.
-Spoon the batter evenly into the prepared slow-cooker.
-Pour the maple syrup and 2 tablespoons melted butter over top of the batter and top with the chopped walnuts (if using).
-Place a few sheets of paper towel over the cooker and place the lid on top.
-Cook on high for approximately 90 minutes.
-Remove the lid and the paper towels, reduce the heat to low, and continue cooking an additional 30 minutes, or until a toothpick inserted in the center comes out clean.
-Cool at least 1 hour.
-Once cooled, run a knife around the cooker and cake to make sure the cake will release itself.
-Using pot holders, place a plate on top of the cooker and carefully flip the plate and cooker over so the cake comes out of the cooker. The cake will now be upside down.
-Place the serving plate on top (now bottom) of the cake and carefully flip the cake and plate over. The cake will now be right side up.
-Serve and enjoy.

Stir together the pumpkin puree and the evaporated milk in a medium bowl. In a large bowl, whisk together the flour, salt, cinnamon, baking powder, cinnamon, cloves and nutmeg. 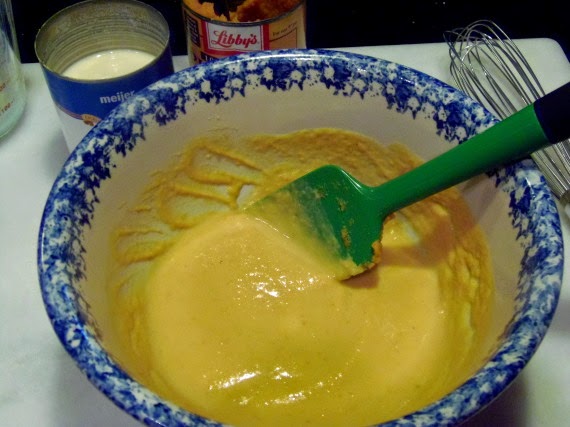 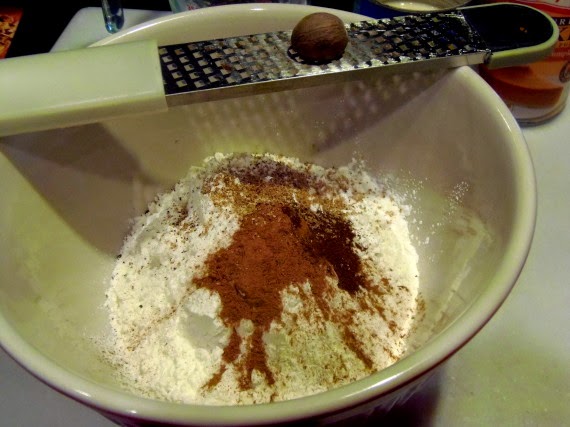 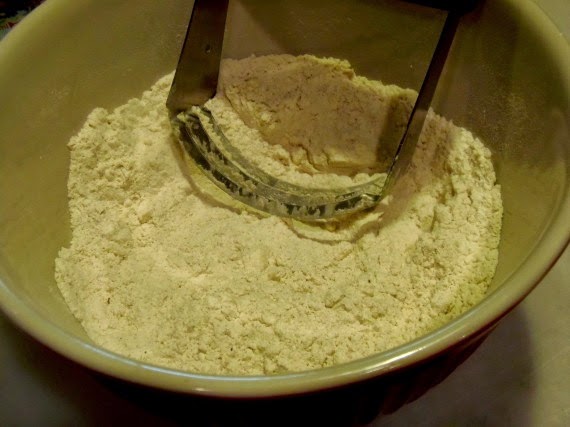 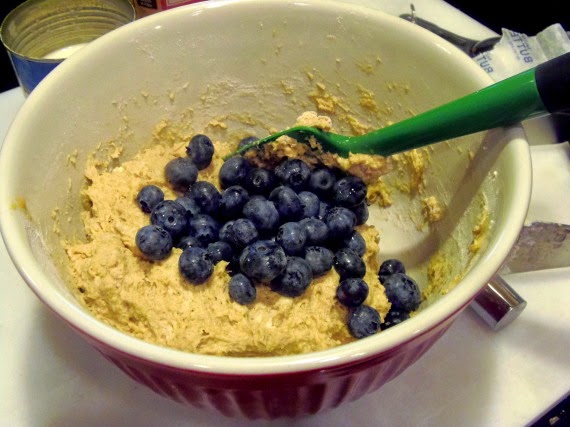 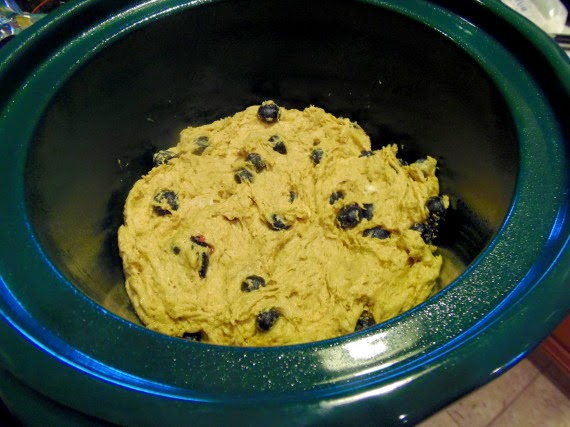 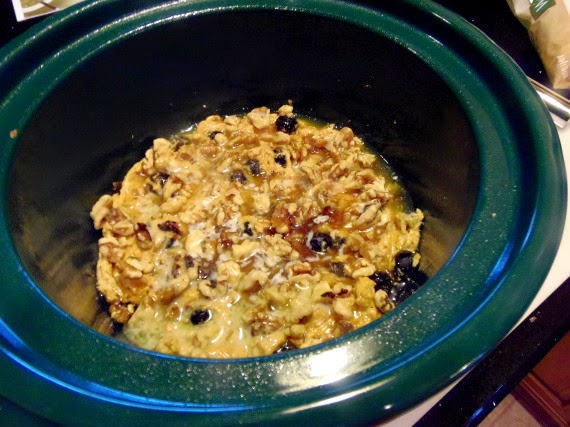 Place several layers of paper towels over the top of the cooker and place the lid on. Cook on high for 90 minutes. Remove the lid and the paper towels. Reduce the heat to low and continue cooking an additional 30 minutes or until a toothpick inserted in the center comes out clean. 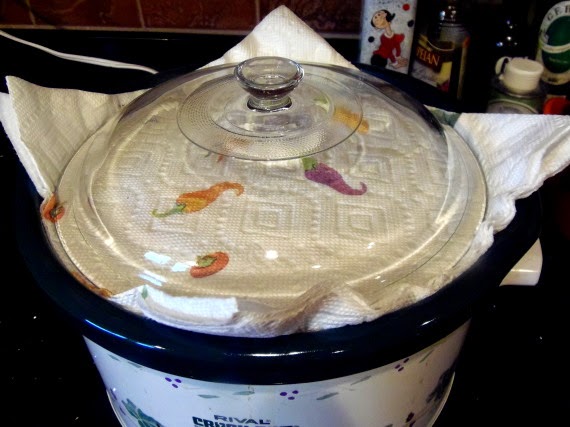 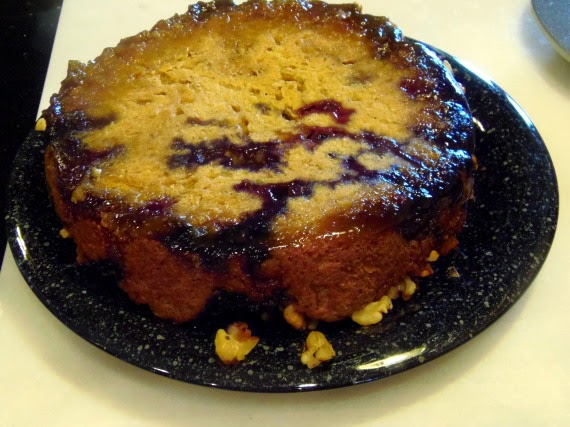 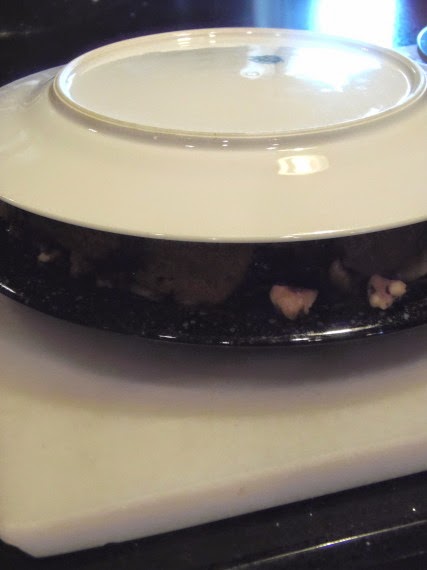 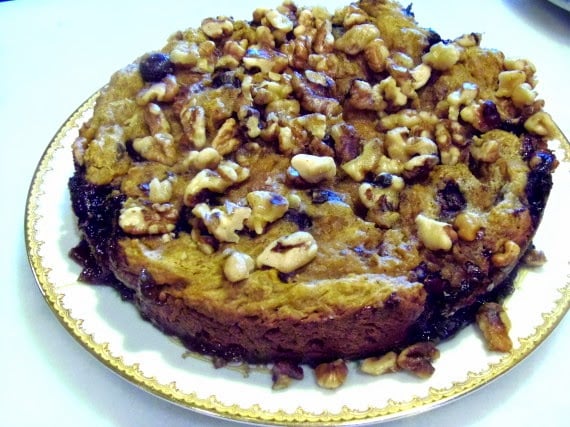 So there you go, my first slow-cooker cake, and I’m 100% positive that it’s not my last. I just know that you’re going to love this recipe as much as I did and that you’ll be able to make it with no worries (just like I did), and with no peeking…I dare you! LOL 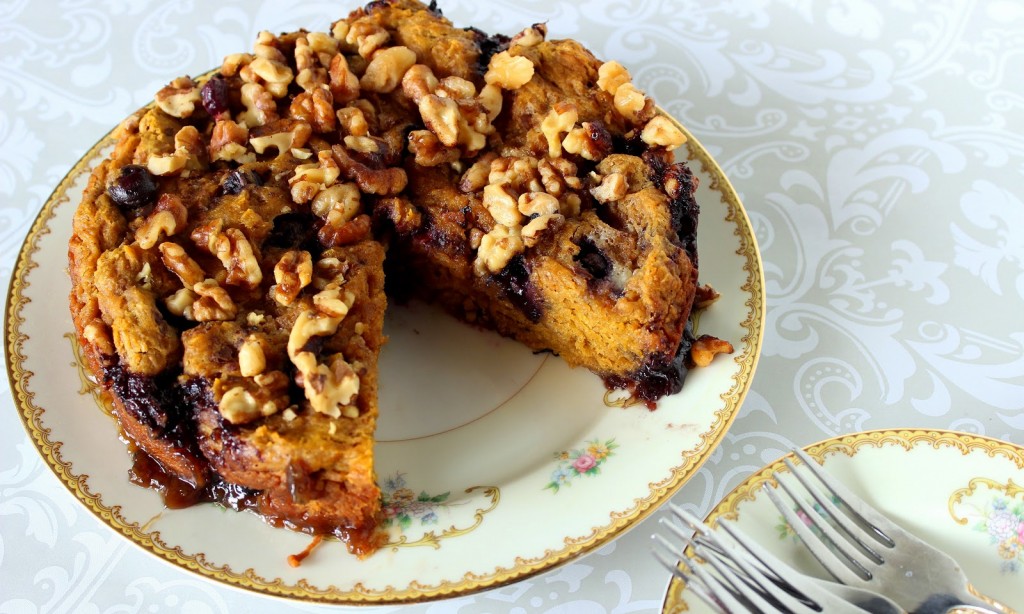 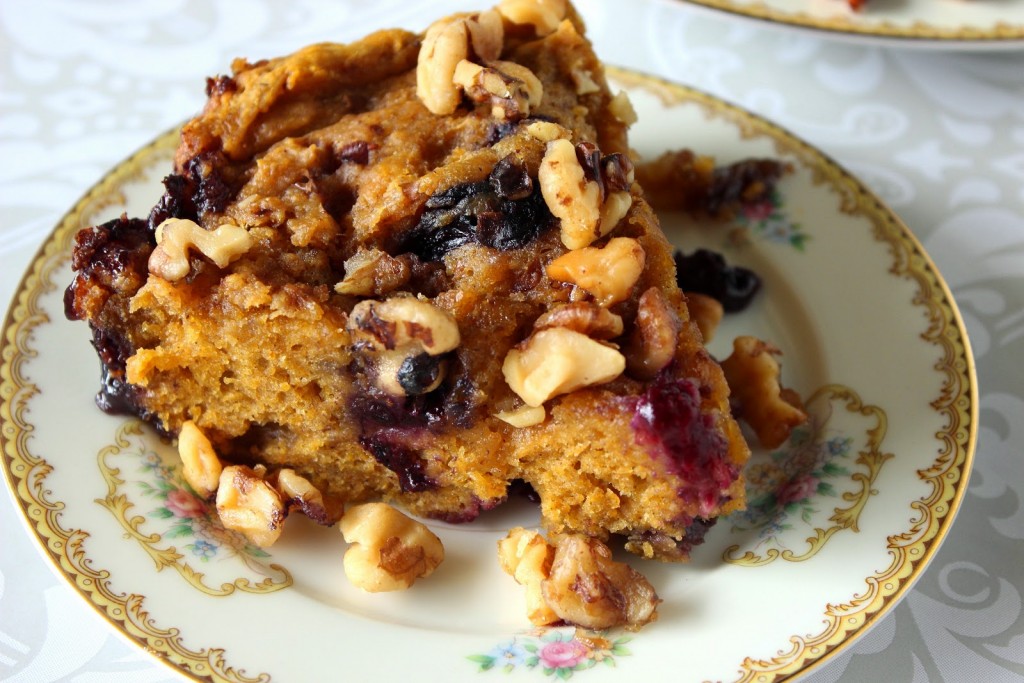 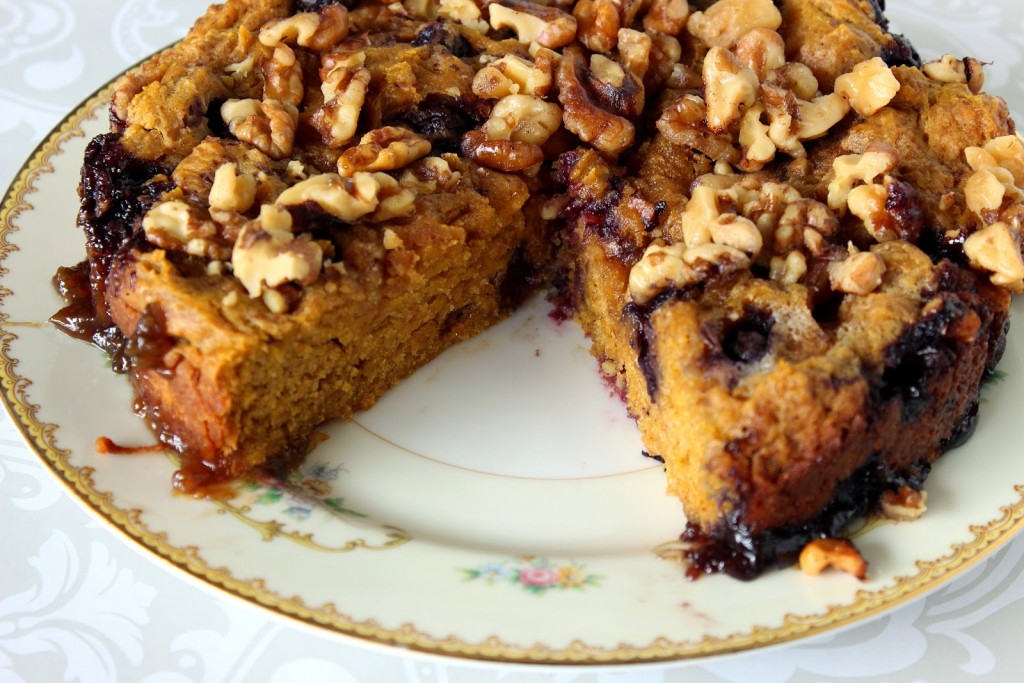 I know I’m not alone in my love of autumn and all things pumpkins (and leaves). And so, I’d like to coordinate this recipe for Pumpkin and Blueberry cake with my original, hand painted design that I call…pumpkin and autumn leaves….Surprise! This cake would go great with a nice pumpkin latte or cup of spiced tea, don’t you think? I sure do. Cheers!

Thanks for visiting me in my Kudos Kitchen. I hope you’ve enjoyed your stay.
Until we eat again,

I'd be like you and sneaking peaks while this was cooking...in a slow cooker!! Amazing. It turned out great, quite a novel concept for me to use a slow cooker to bake sweets but I'm game after see your results!

I honestly can't believe that was done in a slow cooker. It looks great and sure beats heating up the house when it's warmer and you're in the mood for cake.

What a great idea to use the slow cooker for a cake. It looks gorgeous!

I've never tried baking a cake in the slow cooker - I definitely need to try this!