These mini Boston cream pies are filled with a thicker than normal instant pudding and pie filling, as opposed to a traditional pastry cream. You're going to appreciate how quickly these cupcakes are to make, and how much everyone loves them!

I originally shared this recipe in 2014. I've recently updated this post with additional information, including a recipe card (complete with nutritional information), and a video of how these individual mini Boston cream pies are made.

I've changed this recipe only slightly with the addition of a vanilla pudding center, and not a pastry cream, as originally shared in 2014.

I had the idea several months ago to make a Boston Cream Pie and it swirled around and around in my head for all that time before I actually got my ingredients together, and was ready to roll.

After months and months of thought, my idea for Boston Cream Pie had magically morphed into Boston Cream Cupcakes, with the same great taste but in a new mini-self-serve size!

The recipe guide I decided to use was a Martha Stewart recipe I'd found on the web for Boston Cream Pie. After all, who better to go to than Martha, when it comes to baking, right?

Well....at least that's what I had hoped for, but I needed to adjust!

The recipe I'm sharing with you today is my adaptation of Martha's recipe in which I had to play with her ingredient quantities for successful results.

My experience with Martha's written recipe was disappointing for me, but I know that if you follow my changes and adaptions, you'll be highly successful, and that you'll have delicious Boston Cream Cupcakes you'll be proud to serve (not that I'm dissing Martha, mind you).

❓How many cream filled cupcakes does this recipe make?

As written this recipe makes 18 large cream filled Boston Cream Cupcakes so be advised that you'll need two standard-sized muffin tins. That said, one will still work, but you'll have to bake the cupcakes in two batches.

🧊 Can these cupcakes be frozen?

They can, but I would recommend freezing the baked cupcake portion only, and before filling and frosting.

Since the pudding center and the ganache topping only take moments to make this recipe will still be quite speedy to make should you decided to freeze the baked cupcakes in advance as a time-saver.

These cupcakes don't especially require any special baking equipment. As long as you have mixing bowls of all sizes, measuring cups and spoons, a hand mixer or stand mixer, a whisk and a spatula you're off to a good start.

Two standard-size muffin tins will also come in handy, but one will work in a pinch. I like to use the microwave-safe bowl to heat the heavy cream for making the chocolate ganache frosting, and you'll also require a small saucepan (or a second microwave-safe bowl) for heating the butter and milk for the cupcake batter.

A kitchen timer is always a baking essential, as is a cooling rack, toothpicks or a cake tester, and pot holders or oven mitts for retrieving the baked cupcakes from the oven.

You'll appreciate having a serrated knife on hand for when it's time to cut the cupcakes in half, and lastly a piping bag or large zip-top bag works well for adding the pudding filling neatly onto the cupcakes.

If you're baking in a conventional oven, go with the time that is written in the recipe card. 25-30 minutes at 350-degrees Fahrenheit.

If you're baking in a convection oven, cut the bake time down by approximately 5 minutes.

You're looking for the cupcakes to be golden brown in color and for a toothpick or cake tester to come out clean when inserted into the center of a baked cupcake.

The day I remade this recipe and decided to go with a pudding center instead of the standard pastry cream, I also realized that I didn't have any heavy cream in the refrigerator for making the chocolate ganache frosting.

Instead of running out to the store for heavy cream I decided to swap out some flavored coffee creamer I'd been using (it was Almond Joy flavor), and the result was an especially delicious chocolate ganache with very light hint of coconut.

Of course you could potentially use whatever flavor of liquid coffee creamer you happen to have (if you're looking to flavor your ganache), or use the heavy cream as stated in the recipe.

In that same vein, the choice of an instant pudding flavor for the filling can also be swapped for your favorite.

The only thing you'll want to make certain of is that you use less milk than what the large box (5.1 ounces) of instant pudding instruction calls for. You'll only use 2 cups of milk. This way the filling will get nice and thick so it will stay in the center of the cupcakes without oozing out all over the place.

I definitely go against the norm on this as I always use salted butter in my baking.

My feelings are that unless you know for a fact that your store-bought salted butter is unusually salty, you'll never detect an overly salty flavor in your baked good by using salted butter.

However, if you're one of the people to profess "I want to control how much salt is in my baked goods!" feel free to use unsalted butter. It's completely a personal preference. 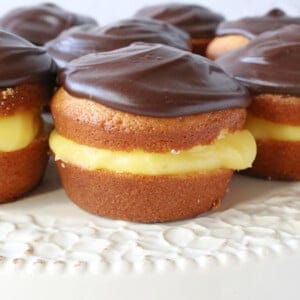 For the chocolate ganache:

To make the cupcakes:

To make the vanilla pudding filling:

To make the chocolate ganache frosting:

To assemble the Boston Cream Cupcakes:

For best results, preheat oven for at least 20 minutes before baking. If baking in a convection oven, reduce the bake time by about 4-5 minutes and test for doneness with a cake tester or toothpick. You can store the finished Boston Cream Cupcakes in the refrigerator (loosely covered) for up to 2 days. I recommend freezing the cupcakes without filling or frosting, for best results. Store the cupcakes in an air-tight freezer container for up to 2 months. Thaw thoroughly and then fill, frost, and enjoy.